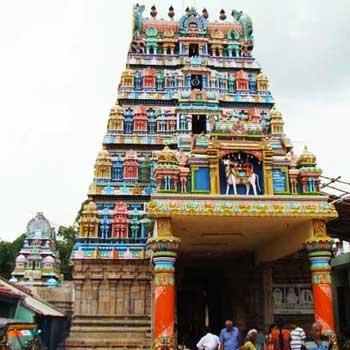 The temple has been in existence from time immemorial. The presiding deity is a self-manifested one and the temple was constructed during the period of Medieval Cholas. Renovations and expansions have been done during the reigns of different rulers over the centuries. Lord Shiva is worshipped as the presiding deity here based on the Saivaite philosophy that Lord Shiva exists everywhere and Lord Sukran is believed to be in the stomach of Lord Shiva. The temple is so significant that Lord Shiva blessed Parasara Muni, a renowned saint of the ancient ages, with His cosmic dance. This sacred place is also called as Palasa Vanam or Agni Sthalam and so the presiding deity is called as Agneeswarar. It is believed that Lord Brahma witnessed the celestial wedding of Lord Shiva at this sacred place.

This temple is one of the Navagraha Temples where Lord Sukran is worshipped. Sukran is the symbol of prosperity and happiness. Devotees throng this temple throughout the year to worship Lord Sukran. They offer white colored clothes and white colored flowers and pray to the God to protect them from the planetary transitions.

The deity in this temple is so significant that the curses of celestial Gods called Devas and also the God of creation Lord Brahma have got relieved after worshipping Lord Agneeswarar. Lord Agneeswarar blesses his devotees along with his consort Goddess Karpagambal.

By Rail : The nearest railway station is at Kumbakonam. You can prefer to travel by road from either Tanjore or Kumbakonam railheads.

By Air : The nearest airport is at Tiruchirapalli. From there, you can reach the temple in less than three hours.

Festivals : The transit day of Lord Sukran from one Zodiac sign to the other which happens every two and a half years, Mahasivaratri, Aadi Pooram, Navaratri, and Arudra Darisanam are the major festivals celebrated in this temple besides the regular poojas and rituals. Car festivals are celebrated during every special occasion and the deity is taken on a procession around the temple and streets.

Best time to visit : All through the year