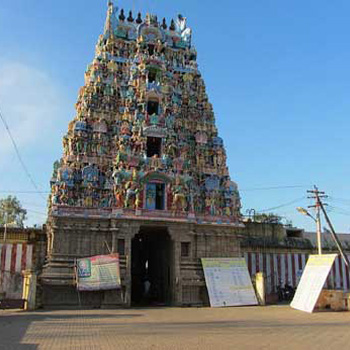 The temple has been in existence from time immemorial which was constructed during the period of Early Cholas. The presiding deity is a self-manifested one. Renovations and expansions have been done during the reigns of different rulers over the centuries. Kasi Aaranyam and Thiru erumpoolai are the other names of Alangudi. The temple was actually constructed by an ardent devotee called Amuthokar who was a minister in the kingdom of Musukuntha Chola Chakravarthi. Once the temple was finished, the minister refused to give half of the merit to his King and so was beheaded. Immediately, the entire village started to reverberate with the sound "Amuthokar". The King realized his mistake and surrendered himself to Lord Aabathsahayeswarar at Alangudi who relieved him from all his sins.

This temple is one of the Navagraha Temples where Lord Guru is worshipped. Guru is the symbol of knowledge and wisdom. Devotees throng this temple throughout the year to worship Lord Guru. They offer yellow colored clothes and channa dal and pray to the God to protect them from the planetary transitions.

The deity in this temple is seen with scars of Chicken Pox and this relates to a historical event. When the Chola King wanted to take off the idol from Alangudi and install it in Thiruvarur, the temple priest protected the idol by disguising it with the scars of Chicken Pox and saved the deity from the King. You can see the scars even today on the face of Lord Aabathsahayeswarar, means the one who protects his devotees when they are in danger.

The transit day of Lord Guru from one Zodiac sign to the other happens here for every two and a half years. Other important festivals celebrated in this temple are the Full moon day (Purnima) during the Tamil month of Chithirai (April – May), Thai Poosam during January-February, Panguni Uthiram in March- April every year. Car festivals are celebrated during every special occasion and the deity is taken on a procession around the temple and streets.

By Road : Alangudi is very near to the temple town Kumbakonam which is at a distance of 14 kms and 40 kms from Tanjore.

By Rail : The nearest railway station is at Mayiladuthurai. You can prefer to travel by road from either Tanjore or Kumbakonam railheads.

By Air:The nearest airport is Tiruchirapalli. From there, you can reach the temple in less than three and a half hours.