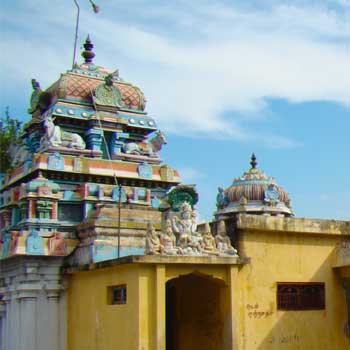 The temple is popularly known as the Chandran Sthalam. It is believed that those born in Kadaga Rasi will overcome all the problems in their life if they come here and worship the presiding deity Kailasanathar and the Moon God called Chandran. While the parkadal were churned by the Devas and Demons, one of the demons received the nectar from Lord Vishnu disguising himself in the form of Deva. This came to the knowledge of Lord Vishnu by Chandran. When he angrily cut the demon into two pieces, they joined with the head and tail portions of a snake and evolved as Raaghu Baghavan and Kedhu Baghavan. Both of them wanted to take revenge on Chandran but with the mercy of Lord Shiva, Chandran got the boon of growing and diminishing in size leading to Full moon Day(Pournami) and No moon day (Amavasya).

Greatness of this Temple:

This is one of the temples under the category Navagraha Temples called the Planetary Deities. This is a thousand years old temple built in the Dravidian style of architecture. Though the presiding deity of the temple is Lord Shiva called as Kailasanathar, the temple is popularly known as Sri Chandran Sthalam meaning the apt place to worship the Moon God. With a five tiered gateway tower, the temple has two precincts. There is a separate shrine for Moon God with other shrines for Lord Muruga, Goddess Gajalakshmi, Lord Vinayagar and others.

The speciality about this temple is that, round the year, thousands of devotees visit this temple to worship Chandran, the Moon God. During the tamil months of Puratasi (September – October) and Panguni(March – April), it is very surprising to see the moon’s rays fall directly on the presiding deity. The offerings made to the Moon God are normally white in color like White Arali Flower(Ghanera), white clothes, Rice mixed with Jaggery. Thingalur Chandranar Temple has a historical relevance with an ardent devotee called Appoothi Adikal and another popular saivate saint called Thirunavukkarasar.

By Rail : The nearest railway station is at Tanjore. Also, you can prefer to travel by road from either Tanjore or Ariyalur railheads.

By Air : The nearest airport is at Tiruchirapalli. From there, you can reach the temple in less than two hours.