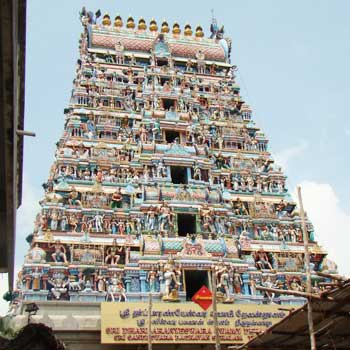 The temple has been in existence from time immemorial, where devotees worship SATURN – Lord SANEESHWAR, to get rid of the problems caused by Saneeshwar in their horoscope. Lord Shiva is worshipped as the presiding deity here based on the Saivaite philosophy that Lord Shiva is pervading everywhere and Lord Saneehswar is worshipped primarily here. The presiding deity is a self-manifested one by the name Dharbaranyeshwarar (Lord Shiva) with his consort Praaneshwari. Renovations and expansions have been done during the reigns of different rulers over the centuries.. The temple is so significant that Lord Shiva blessed Lord Saneehswar here after taking bath in the temple tank called Nala Theertham. The story behind this is, the celestial Gods called Devas wanted to marry the Princess of the Nishadha Kingdom, Damayanthi. But she married another King called Nalan. The furious Devas, with the help of Saneeshwar, made Nalan’s life miserable for seven and half years and Nalan suffered a lot during these years

At last, Nalan reached Thirunallar and worshipped Lord Shiva present in the name of Lord Dharbaranyeswarar and got rid of all his problems. He also got a promise from Lord Saneeshwar that whoever comes to this place and worships him, should not be affected by any difficulties. So is the sacred temple very popular among the devotees across the country.

This temple is one of the Navagraha Temples where Lord Saneeshwar is worshipped. Saneeshwar is the symbol of will power and courage. Devotees throng this temple throughout the year to this temple. They offer black coloured clothes and cereals and pray to the God to protect them from planetary transitions.

The transit day of Lord Saneeshwar from one Zodiac sign to the other which happens every two and a half years is celebrated in a pomp manner with lakhs of devotees worshipping Him to protect them from all ill effects. Mahasivaratri, Margazhi Thiruvadhirai and Ippasi Annabhishekham are the major festivals celebrated in this temple besides the regular poojas and rituals. Car festivals are celebrated during every special occasion and the deity is taken on procession around the temple and streets.

By Road Thirunallar is at a distance of 33km from Mayiladuthurai and 5km from Karaikal.

By Rail The nearest railway station is at Pondicherry. You can prefer to travel by road from either Pondicherry or Mayiladuthirai

By Air The nearest airport is at Chennai. From there, you can reach the temple in less than Six hours.

Special note (Timings) : Daily ritual of anointing the Presiding deity in the sanctum is at 06.00 AM