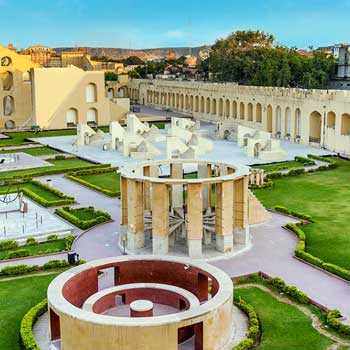 Declared as a National Heritage Monument, Construction of Jantar Mantar dates back to 17th century. Built with local stone and marble, the astronomical instruments are the epitome of the medieval period in Indian Astronomy where measuring the distance and position of celestial bodies was carried out accurately. Scientifically factual geometric shapes have been used in constructing the instruments, out of which Vrihat Smarat Yantra is acclaimed as World’s Largest Sun Dial.

Popular Attractions of Jantar Mantar are Vrihat Smarat Yantra, Laghu Smarat Yantra, Ram Yantra, Jaya Prakash Yantra, Chakra Yantra, Nadivalaya and Digamsa. Angles, coordinates, distances, Solar Sign are few of the many parameters measured in the past with the instruments depicted in the museum.

Special Feature: Audio Guide is available which can explain about the background and history of every instrument.

How to Reach Jantar Mantar :

Air : Jantar Mantar is at a distance of 12 kms from Jaipur International Airport. Public transports or taxis can be hired to reach the venue.

Rail : The rail head of Jaipur connecting various parts of Rajasthan is at just 6 kms from Jantar Mantar, which can easily be crossed with multitude of transports.

Road : Jaipur has good network of roads connecting it with major Indian cities. NH 8, NH 11 and NH 12 are the main national highways connecting the city of Jaipur with other cities. There are good services of Buses and Private Taxis available.