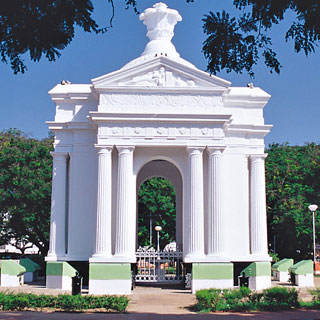 Pondicherry, the most enchanting tourist destination in India, is unlike the other popular tourist locations known for major architectures, shopping zones and other highlights. Pondicherry is the one destination where there is a perfect amalgamation of the French and Indian cultures portrayed in all aspects of the city.

Pondicherry has something to offer for every kind of tourists visiting the city. The spiritual seekers visit Pondicherry in search of the salvations in the Ashrams. Those who want to explore the city and its cultural heritage are amazed with the splendid buildings built in the French style. The buildings painted in white and yellow give you an unique experience. The foodies visit Pondicherry for the variety of food items in the cosy restaurants where you have ample choices with a tint of international recipes, mainly the French cuisines.

Pondicherry has many locations kindling your interest as a traveller. Out of all the monuments and the popular buildings, one such monument is Aayi Mandapam. It was actually built during the reign of Nepolean III in the 16th century. The monument situated at the centre of the Barathi Park attracts the visitors round the year. The 16th century building has got an inspiring story behind which surprises every tourist visiting the monument.

When King Krishnadeva Raya visited Pondicherry with his regime expanded its territories from Karnataka to Kanyakumari, he stood in front of a building which was quite amazing with a splendid outlook. Later on, he came to know that the house was owned by a woman called Aayi, who dedicated her life to the services of God. Following the demolition of the house, Aayi dug a pond which was offering water to the local residents. After few years, there was a canal constructed, originating from the pond supplying fresh water to the nearby regions where the people were suffering due to the lack of good water resources. When Nepolean III heard about the services of Aayi, he ordered to build a memorial for honouring her services to the mankind. This is the story of how Aayi Mandapam has emerged as a historic monument in Pondicherry. Aayi Mandapam is also called as Park Monument.

Plan to visit Aayi Mandapam during your trip to Pondicherry, the city which is ideal for a perfect weekend getaway from Bangalore and Chennai.

Train : From the Pondicherry railway station, the  Aayi Mandapam is at a nearby distance of just 1.8km via H.M.Kassim Salai.