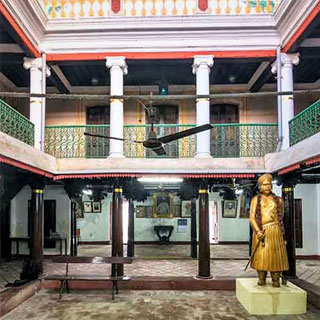 Pondicherry has many attractions to its credits drawing tourists from all corners of the country and the globe as well.

The most prominent heritage monument located in Pondicherry is the Ananda Ranga Pillai House which has bundles of events and stories from the 17th century French India. Historians record that the contribution of Ananda Ranga Pillai to know about the 17th Century South India is a priceless work brought out to the world in the form of short descriptions in his diaries.

The most popular Dubash, that is, the official translator and the commercial representative of the French Government, Ananda Ranga Pillai was found to be the most influential person in Pondicherry. His proximity to the French Governor Joseph Francois Duplex is highlighted in history who favoured him in various appointments throughout his tenure in India. Ananda Ranga Pillai also has recorded in his diaries that the period of Joseph Francois Duplex's Governance was the golden period of French Government in Pondicherry after whose departure to France, corruption and mismanagement plagued throughout Pondicherry, spoiling the systems to a greater extent.

With an increased intensity, he was frequently troubled by poor health. By 1756, his health had deteriorated to such an extent that the Governor-General Georges Duval de Leyrit was obliged to remove him from service. On 12th January 1761, he left this world but his notes on his diaries will live forever. For his contribution through his diaries which has led many of the historians and researchers to know more about South India, he is acclaimed as “Pepys of French India”.

The palatial residence of Ananda Ranga Pillai which has survived the invasion of British is recognized as a heritage monument by the Government of Pondicherry and the street is named after him. The ground floor is built in the Indian architecture style and the first floor is built reflecting the French architecture. Blended with the Dravidian and French architecture, the residence of Ananda Ranga Pillai is worth a visit during your trip to Pondicherry.

The heritage monument can be visited between 10 am and 6 pm on any day. The descendants of Ananda Ranga Pillai are still living in the building the house is well maintained. You may even have the chance of listening to the history of the building and of the man himself by his successors.

Train : From the Pondicherry railway station, the Ananda Ranga Pillai house is at a walkable distance via Mahatmi Gandhi Road.

Road : The Union Territory of Puducherry has well laid network of roads connecting the major cities in the neighbouring states. Ananda Ranga Pillai house can be reached in a hassle free road travel from any of the prominent cities around.