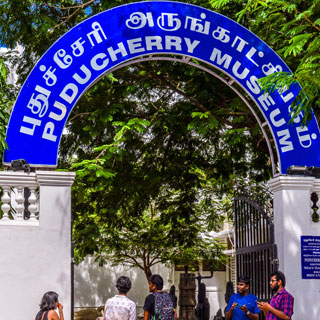 Pondicherry is known as the "little France" The scent of the Gallic lifestyle still blows in this White Town. People without a weekend plan can sniff the serene beauty of this scenic town. Lying close to Tamil Nadu's capital city, Chennai, the Goa-like beaches bring a relaxed mood to your senses. Torn a hectic schedule into pieces and chill out with your friends and family wandering the streets of this pleasant place. Pondicherry is well connected with the major cities around with train or with well laid network of roads which bring in more number of weekend tourists from Chennai and Bangalore.Try reaching here after sunset or on the verge of twilight to capture the exact essence of this soothing town.

The rented bicycles is an interesting choice for navigating the town as the Netherlanders do. Roy Chaudhary's Gandhi statue is a major attraction at a distance of 2.5 km from the Pondicherry Bus Stand. Besides the other popular locations of Pondicherry thronged by visitors almost round the year, Pondicherry museum deserves a special mention here. Taking you in the time machine with the numerous artefacts used since centuries add value to your visit to Pondicherry. After waking up, head straight toward the Pondicherry Museum located on the Saint Louis Street heaped with the remnants of the articles used since the Chola and Pallava dynasty.

The visitors are surprised to have a look at the collection of bronze and stone sculptures, French furniture, swords, paintings, mirrors, terracotta figures, guns, and burial urns inside the museum. The former law building consists of snail shells, Tanjore paintings, an earlier version of auto rickshaw called "pousse-pousse", and Roman remnants. There is also a geology room and fossil room showcasing the vibrant memories of the archaeological site, Arikamedu. Emerging numismatists should explore this space for fuelling their knowledge repository.

The Mahatma Gandhi statue on the Promenade beach, elephant blessings from the archaic Ganesh Temple, majestic Catholic Church, patriotism-filled Kargil War Memorial, and Paradise beach are unavoidable spots to lay your foot on. Every place here possess a different aura and your surging emotions don't want you to leave this calm destination forever. Get ready to celebrate a memorable and surprising weekend with your loved ones in Puducherry.

One line fun: Pondicherry was renamed as Puducherry in 2006

Time: 10 AM - 5 PM (Closed on Mondays and National Holidays)

Other Statues: Statue of Dupleix, Saint Joan of Arc Statue

Train : From the Pondicherry railway station, the famous museum is at an easily accessible distance.