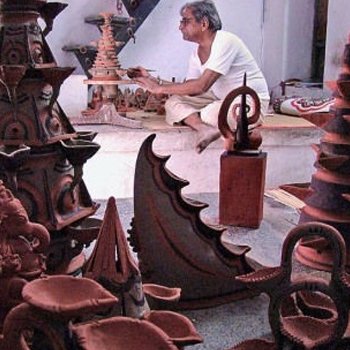 A hub of rural knowledge where you can explore the lifestyle and cultures of rural Telangana is Kala Ashram, the effort of an individual in search of rejuvenating the technology and science behind rural living.

Ornaments Sprawling across a two acres land, Kala Ashram offers solutions for those stuck between the ancient thought process and modern technology.

Situated in Tantoli Road of Adilabad, Kala Ashram fosters the link between artistes and artisans and preserves it unbroken to take it to the next lelvel.

The following are the key objectives of kala Ashram, which was established in 1979.

With an aim of blending the Indian rural traditions with modern technology and bringing out and reinstate the bonding between the rural artisans and artistes across the country and globe, Kala Ashram was founded in 1979 by Sri Ravindra Sharma, who had a keen idea about the culture, heritage and economy of the entire region in and around Adilabad. With his expertise in more than fourteen rural art forms prominent in the region, he was able to inculcate the same spirit in more than hundreds of artisans till he breathed his last.

Establsihed with an aim of reinventing the culture and tradition native to the region, Kala Ashram is home to hundreds of artisans and culture enthusiasts to learn more about the rural arts and intricacies behind.

Kala Ashram houses a museum of local artifacts, various wooden deities, ceremonial headdresses of the Gonds, ornaments worn by Suthari women, household vessels and musical instruments which were in widespread utility. The annual diyas, the exhibition conducted by Kala Ashram during Diwali times is attended by most the artisans connected to the Ashram, especially for potter community. It is highly commendable and surely deserve a visit to explore the artifacts of Kala Ashram which has been thriving to connect the past to present, continuously.