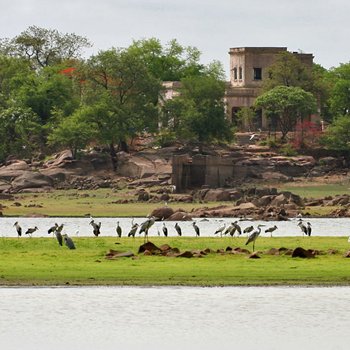 Pocharam wildlife sanctuary in yester years was a favorite hunting ground to Nizams. The sanctuary sprawls across an area of 129 sq.km and is blessed with variety of flora and fauna.

It was established in the year 1952 and is named after the beautiful Pocharam Lake, formed after the construction of Pocharam Dam on the River Allair between 1916 to 1922. The sanctuary sprawls across an area of 130 sq. km and is blessed with a rich variety of flora and fauna. It was declared as a wildlife sanctuary in the early years of the 20th century.

Reservoir adjacent to this sanctuary is worth a visit, as it attracts birds like the painted stork, bar-headed goose, brahminy duck and many more. And animals like the sambar, Nilgai, leopard, forest cat, sloth bear, wild dog, wolf, and jackal are found here.

The surreal beauty of Pocharam Wildlife Sanctuary and the unmatched peace and tranquillity it offers makes it an ideal escape from the hectic life to the laps of Mother nature. Surrounded by lush green forests, Pocharam Wildlife Sanctuary is home to many species of animals and birds. Animals like Brahminy Bucks, Chinkara, Sloth Bear, Sambar, Jackal, Wild Boar, Leopards, Four Horned Antelope, Hyena, Wild Dog, as well as Birds like Peacock, Black and White Ibises, Herons, Coots, Spoon Bills, Teals, Painted Storks, Cormorants, Open Billed Storks, Pochards, etc; are some of the main inhabitants of this Sanctuary. Pocharam Wildlife Sanctuary is a treat for nature lovers, wildlife enthusiasts, and bird watchers. It also offers a fascinating spot for adventure lovers where they can indulge in a thrilling trekking trail that stretches for over 4.5 Km and passes through thick forest growth and marshland.