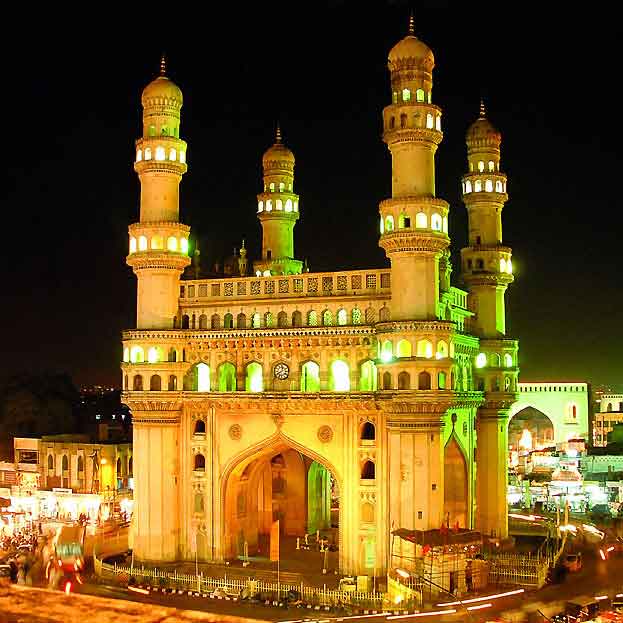 Hyderabad is a land of everything. Like the two side of a coin, Hyderabad is blessed with both modernism and rich history. Ruled by different dynasties, the monuments display incredible architectural splendor. This place is a feast for your eyes, mind as well as your tongue, as the city offers an excellent cuisine. Especially Hyderabad biriyani is very famous; never leave without tasting this palatial dish. There are lots of historical monuments, parks, and museums to visit, following are few important places,

When we think of Hyderabad, first thing that strikes everyone’s mind is the grand Charminar. This incredible monument is located in the heart of the city, which was constructed by Mohammed Quli Qutub Shah, in the year 1591. The whole monument is craved out in unique Cazia style. The main intension behind building this masterpiece to ward off deadly epidemic, which claimed many lives during that period. The main four minarets are 48.7 meter tall, inside there is a mosque and 45 prayer spaces. Around this place is the Bazzar, where one can get handmade crafts at cheap price.

Golconda Fort is a must to visit place at Hyderabad. “Golla Konda”, means Shepherd’s Hill, this fort was erected during the rule of Yadava and later it was conquered by many dynasties including Kakatiya Dynasty, Kakatiya Dynasty, Bahmani Dynasty Bahmani Dynasty. This 13th century monument is known for its acoustics effects. The most incredible part of this fort is that, if we clap your hands at Fateh Darwaza, the sound can be clearly heard at Bala Hissar, which is located a kilometer away. Whispering walls is yet another mystery of this fort.

The magnificent palace is located on top of a hill, which is the reason for its name Falaknuma Palace, meaning Mirror of the Sky. The palace was built for the Fifth Paigah Emir by an architect from Italy. Nizam, the Sixth, bought it later. Nizam’s interest in arts can be gauged by the collections of statues, paintings, manuscripts and furniture from all parts of the world. The Sound and Light Show held here narrate the history of Golconda Fort and its glory.

Apart from forts, and monuments, Hyderabad is also known for Zoological parks. Nehru Zoological one of the trademark of Hyderabad. This park sprawls across an area of 300-acre, with over 1500 wildlife species at Bahadurpur. In the year 1963 this park was established. We can witness lion, royal Bengal tiger, white tiger, rhinoceros, orangutan and a lot more. Reptiles such as Indian cobra, star tortoises, and giant tortoises. Elephant safari into the woods is also available here. Major attractions in this area include Lion Safari Park, Children’s Train and Natural History Museum

Yet another popular tourist spot in Hyderabad is Asia’s largest artificial lake named Hussain Sagar Lake. It is located just 2 km away from the city’s center. It connects Hyderabad and Secunderabad, called the twin cities. It was excavated during the period of Ibrahim Quli Qutub Shah in 1562 AD. The statue of Buddha in the middle of the lake is 16 meters tall. Boating facilities are available here. You could take part in water sports namely boating, skiing, cruising and para sailing. Apart from Hussain Sagar Lake, even the surroundings offer entertainment as you can find NTR Gardens, Sanjeevaiah Park, Lumbini Park and so on.

Behold the white beauty of Birla Mandir, located at the Southern end of Hussain Sagar. This beautiful temple is built fully with white marble and offers a spectacular view. The style followed in constructing this temple is both Dravidian and Oriyan. Its mind-blowing beauty will tempt you to visit again and again. Never miss Birla Mandir while you are at Hyderabad.

Salarjung Museum was founded in the year 1951. The museum has stunning collections and most of them were from Mir Yousuf Ali Khan, famously called as Salar Jung III. The collections are exhaustive and could be classified as Indian Art, European Art, Art of the Middle East, Far Eastern Art and a section for children. The collections include antiques from various parts of the world. Indian sculptures, bronze statues, Persian carpets, Chinese porcelain, jade carvings, woodcarvings and many more.

Air : Hyderabad owns an international Airport which is one of the busiest airports in India. Flight service are there to other nations and also within India. There are lots of frequency for flights to Chennai, Bangalore, Delhi and Mumbai.

Bus : Busses to cities like Chennai, Bangalore, Tirupathi, and Mumbai are available all day. Hyderabad is well connected to other parts of India through national highways.