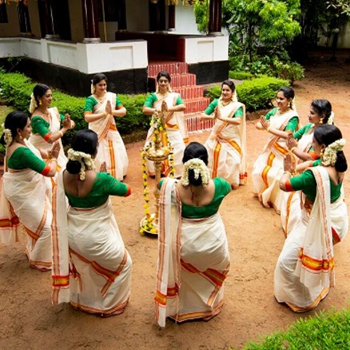 What is special in this festival?

The whole Kerala is emblazoned with flowers and colors during Onam festival. This is the most vibrant festival in Kerala; the whole state turns out to be boisterous mob during the 10 Days of this festival indulging themselves in dancing, boating and merrymaking. In Kerala, Onam is the harvest festival commemorated in the month of Chingam (The first month in Malayalam Calendar = the month of August or September as per the English calendar).

The Folk Tale:The legend has it that King Mahabali ruled kerala in a most efficient way but was tinted with ego. Seeing all this Lord Vishnu decided to teach him a lesson, so he disguised himself as a petite Brahmin and demanded three steps of land from Mahabali. Hearing this Mahabali laughed at him and asked him to ask more because he can afford even thousand little steps of land. But in one step of the Brahmin the whole world got engulfed and the second step the heaven was trapped, there was no place left for his third step.

He was set aghast in seeing all this, and then he realized that Lord Vishnu is the one came in disguise, so he politely surrendered before him and showed his head for his third step. Vishnu’s mission was completed and King Mahabali shed his entire ego and was blessed by Vishnu that he will live perpetually and will give visit to his state once in a year. This day is named as Onam, during Onam every house in Kerala is kept open and is adorned with flower mats in the threshold to welcome King Mahabali.

Palatial Dishes:The celebration of Onam lasts for four to ten days. First day, Atham and tenth day Thiruvonam are most important of all. In 1961 this carnival was declared as a National Festival of Kerala. The most impressive part of Onam celebration is the grand feast called Onasadya, prepared on the day of Thiruvonam with delicious traditional Kerala dishes and the other specialty is that Onasadya is served on banana leaves that make the dishes tastier. The whole family members gather together and pray to the God before relishing the dishes. The food prepared during this day is extremely palatial that our estuaries will never get saturated.

Celebrations:Along with the food and prayer there are so many jubilant activities that add on to the happy vibe of Onam. Thiruvathirakali is a traditional dance performed by women, PuliKali and Pookalam are the dances performed in the front courtyard of house to welcome King Mahabali, Kummattikali and Vallamkali (Boat Race) etc. are some of the cultural programs that takes place during Onam.

In this period Kerala celebrates Onam as a ‘Tourist Week’ & thousands of domestic and foreign tourists visit Kerala to enjoy and be a part of Onam celebration.

All these features make Onam one of the biggest & nostalgic festivals of Kerala.