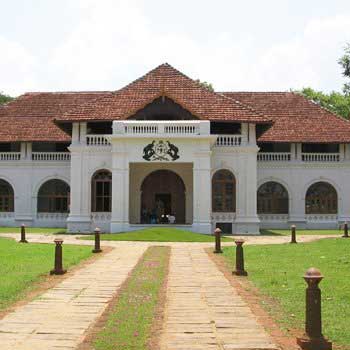 The Mattancherry Palace is a Portuguese palace popularly known as the Dutch Palace, in Mattancherry, Kochi. It features Kerala murals depicting Hindu temple art, portraits and exhibits of the Rajas of Kochi. The Palace was built and gifted by the Portuguese to the Raja of Cochin around 1555. The Dutch carried out some extensions and renovations in the palace in 1663, and thereafter it was popularly called Dutch Palace. The rajas also made more improvements to it. Today, it is a portrait gallery of the Cochin Rajas and notable for some of the best mythological murals in India, which are in the best traditions of Hindu temple art. The palace was built to appease the king after they plundered a temple nearby.

The palace is a quadrangular structure built in Nallukettu style, the traditional Kerala style of architecture, with a courtyard in the middle. In the courtyard, stands a small temple dedicated to 'Pazhayannur Bhagavathi', the protective goddess of the Kochi royal family. There are two more temples on either side of the Palace, one dedicated to Lord Krishna and the other to Lord Siva. Certain elements of architecture, as for example the nature of its arches and the proportion of its chambers are indicative of European influence in basic Nallukettu style. The Dining Hall has carved wooden ornate ceiling decorated with a series of brass cups. The palace also contains rare examples of traditional Kerala flooring, which looks like polished black marble but is actually a mixture of burned coconut shells, charcoal, lime, plant juices and egg whites.