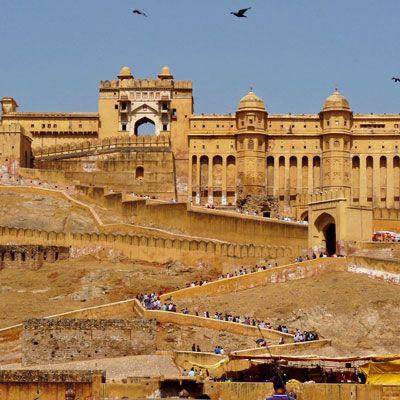 Ajmer is a colourful city, just under 150 km from Jaipur. Pushkar is close to this vibrant city of Rajasthan (less than 20 km away).

From Ajay Meru, Ajmer is born and it means an immortal mountain. A beautiful destination in west India for the world of travellers. The heart of Indian diversity can be felt in Ajmer, from ethics, culture, community, religion, and artforms, Ajmer is a must-visit place in Rajasthan.

The blend of such powerful traditions and cultural practices have never created havoc within Ajmer; an example for the rest of the world. Harmony thrives in Ajmer.

Both Muslims and Hindus of this country find Ajmer a peaceful union of two beautiful religions. A profound pilgrimage destination for the two religions, a popular tourist attraction for the unprejudiced travellers of the world. Khwaja Moinuddin Hasan Chisti, the renowned Sufi Saint’s final resting ground is a place for the world of Islam lovers. And, Dargah is a place where Muslims and Hindus unite for prayers, a highly revered place.

Ana Sagar Lake curls through the entire city and the rough terrains of Aravalli mountains. After the resting ground and shrine of Khwaja Muin-ud-din Chisti, the next most visited destination in Ajmer is Jain Temples. The artistically appealing Jain Gold Temple heralds the world of harmony, Ajmer is the perfect example for religious tolerance. A learning centre for the world too, as the Mayo college is one of India’s first ever schools which also acted as a crucial growth factor for the British Education System. Another treasure trove in Ajmer for the world of historians and storytellers.

Adhai Din Ka Jhonpra was constructed to operate as a College for learning Sanskrit. Later, it was converted into a mosque in 1198 AD by Sultan Ghori. The perfect blend of Indo-Islamic architecture that was in the later period well-crafted by the famous Sultan Iltutmish around 1213 AD. The meaning of Adhai Din Ka Jhonpra is - A Hut of Two and a Half Days, relating to the fair that was held in the 18th century.

Ajay Nagar in Ajmer is famous for Sai Baba Temple that was built by Suresh K Lal. It is spread across three acres and is one of the most highly revered places in Rajasthan. Sai devotees thrive to this spiritual zone for prayers. The purest forms of marbles were used to build this temple which contains a different quality of a semi-transparent stone, allowing just light to penetrate.

Most festivals and religiously important events take place between the months of October and March. Summers are scorchingly hot while monsoons too have high humidity and so winters are perfect in Ajmer for sightseeing and exploring activities.

Rail: Ajmer Railway Station is well connected to the rest of India and one of the superfasts that daily pays its visit here is Delhi-Ajmer Shatabdi

Air : The nearest international airport is in Jaipur, the capital of Rajasthan (less than 135 km away) from Ajmer.

Road :There is consistent traffic in Ajmer and roads here are well connected to the rest of Rajasthan for convenient commute.