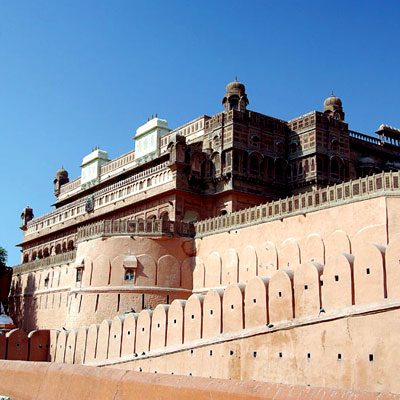 Bikaner The connection of the Britisher’s biplane during the first world war and sand dunes set across the North-east and Southern area make an impact about the beautiful city - Bikaner.

The northern region of Rajasthan is where Bikaner is located. Being one of the eldest cities of Rajasthan, Bikaner holds the value of Rajasthan in its forts and palaces, which is made of red sandstone. As the moniker goes by, Bikaner is really the Camel Country where the best camels in the world are ready to take you for a ride.

The world’s largest camel breeding farms and research is located in Bikaner only.

The Rat Temple is another Cultural shock for many Europeans and Americans, as in Karni Mata aka Rat Temple offers food for rats. It is in Deshnok and is definitely not for the light-hearted.

The fort complex houses some magnificent palaces constructed in red sandstone and marble and visitors can feast their eyes on an attractive assortment of courtyards, balconies, kiosks and windows. The impenetrable bastion of Junagarh is a unique monument in Bikaner which has never been captured by anyone.

Raja Rai Singh had constructed this marvel in 1588 AD. He was one of the linchpin ministers of the Akbar army. Travellers from all around the world can enjoy the marvellous works in the balconies, windows, courtyards, and kiosks of Junagarh Fort. They are all built with red sandstone and marbles in an exquisite manner.

Just 8 km away from the city, the National Research Centre for camel is present and this one is the exclusive breeding and research centre in the whole of Asia. The Government of India manages this 2000 acres of terra. Lalgarh Palace and Museum came to existence due to the valiant efforts of Maharaja Ganga Singh.

To commemorate Maharaja Lal Singh, in 1902, this memorable monument made of red sandstone came to place. Sir Swinton Jacob conceptualized this design and he used a blend of European, Rajputana, and Islamic architecture.

The residence of Maharaja Ganga Singh, king of Bikaner is Laxmi Niwas Palace. Again, Sir Samuel Swinton Jacob, the British architect is responsible for this stunning structure which was built between 1898 and 1902.

The Indo-Saracenic architectural style residence is now a luxury hotel for all domestic and international travellers. There are separate sections for paintings, arts and craft, woven carpets, clay pottery, ancient coins and Rajput weaponry. Bikaner’s best museum is Ganga Government Museum and it contains an opulent collection of Early Gupta and Harappa archaeological artefacts. From Rajput weaponry to art, craft, paintings, clay pottery, woven carpets, and ancient coins, Bikaner museum is a must-visit destination in Rajasthan.

Rail : Lalgarh Railway Junction and Bikaner Junction are located just km away from the urban area.

Road : The roads of Bikaner are relatively smooth, also tongas and autorickshaws make the journey a memorable delight in Bikaner.