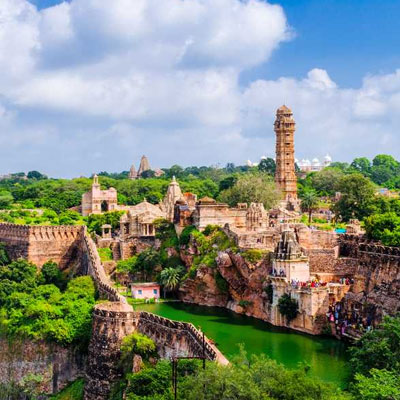 RajasthanOne of the bravest cities of Rajasthan, known for sacrifice, pride, and courage of the Rajputs. The Chittorgarh Fort of Rajasthan still effumes bravery bards of the Rajputana warriors.

Chittorgarh has been through a lot of traumatic events.

The initial seizure of the fort in 1303 by Alauddin Khilji, trying to capture Queen Padvathi started the timeline for the continuous capture of Chittorgarh Fort. 200 years later, Bahadur Shah. the sultan of Gujarat caused huge destruction.

Meanwhile, Mughal Emperor Akbar seized the fort in 1568 forty years later. Only in 1616. Under the rule of Mughal ruler Jahangir, the fort was given back to the Rajputs.

The symbol of Rajput’s audacious past stays with Chittorgarh Fort. On a 180 metre high hill that is widespread across 240 hectares, Chittorgarh Fort is built. The construction of this indomitable fort is often associated with the mythological hero - Bhim, one of the five Pandavas. With full of majestic monuments, Chittorgarh Fort is a masterpiece full of eternal scares, not wanting to heal as all those wounds bleed the bards of warcraft and bravery of the Rajputs.

Rani Padmini’s Palace plays a major role in the history of Chittorgarh. On the banks of the Lotus Pool, Rani Padmini’s Palace is where Alauddin Khilji had first seen the image of Rani Padmavati. The Tower of Victory or Vijay Stambh is another beautiful attraction in Chittorgarh. It was built by Maharana Kumbha between 1440 AD and 1448 AD as a means of celebration fr defeating the rulers of Malwa and Gujarat.

A nine-storey tower made of Redstone and sandstone, full of mythological depictions of Hindu Gods and Goddesses. The entire town’s panoramic view is available when climbed to the top of the tower through narrow steps.

Chittorgarh Fort has six Jain Temples within its fort complex and the largest them all is Bhagawan Adinatha Temple. While there is another tower called Kirti Stambh, the Tower of Fame which is a dedication to Adinathji. The first Jain Tirthankara, the great teacher. An affluent Jain merchant had built this shrine in the 12th century AD. Jain Monks or Digambars add charm to the already lit Adinathji.

Fateh Prakash Palace is yet another marvel of Chittorgarh, known for celebrating the artistic qualities of Rajputs. Maharana Fateh Singh’s Palace hosts a large collection of wooden crafts of Bassi hamlet. The palace holds a lot of treasures of the locals and warriors. It is now converted into a museum of heritage values. The Kalika Mata Temple in Chittorgarh is a place meant for worshipping the Sun God. During the 14th century, this temple had been dedicated to the powerful deity Kali, the symbol of valour and power.

Rail : On the banks of the river Ghamberi. Chittorgarh Railway Station is located.

Road : There are frequent bus services in Chittorgarh which connects the domestic states of Rajasthan while autorickshaws are useful in travelling around Chittorgarh Fort.

Air : Dabok is the nearest airport to Chittorgarh, which is 98 km from Udaipur.