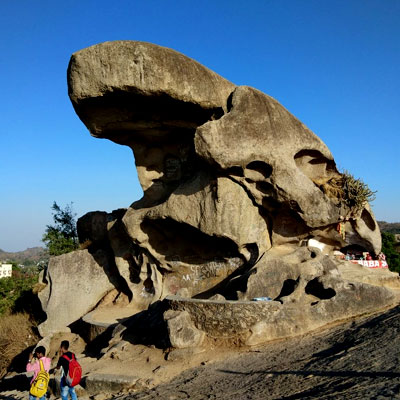 Mount Abu Probably, one of the picturesque destinations in Rajasthan that is truly unRajasthani in its vibe and geographical qualities.

The gift of the Aravalli ranges, Mount Abu is the only luscious hill station in Rajasthan which is 1744 above sea level. Colourful abodes of the original tribal people, regal holiday homes, and British Bungalows make Mount Abu a dream destination for nomadic explorers and full-time travellers.

Mount Abu is an authentic oasis of the Thar desert which not only has water but also a benevolent green cover. As Mount Abu is near the luxurious royal corridor of Udaipur, it is a highly preferred destination amongst European and American travellers. Jain Temples are flooded in this part of Rajasthan while there are many stunning architectural wonders for historians and architects.

The must-see destination in Mount Abu is Nakki Lake. The first man-made lake in India and is one of the few destinations in Rajasthan for boat rides during sunset. It is also said that the ashes of Mahatma Gandhi was immersed in this lake. Toad Rock is a beautiful destination to chill in Mount Abu.

Guru Shikhar is the highest point on Mount Abu and a splendid destination to sightsee in the coolest and greener zone of Rajasthan. There is spirituality entangled with Mount Abu as there is a beautiful temple of the trinity gods - Brahma, Vishnu, and Shiva. Guru Dattatreya is the temple there, it takes 300 solid steps to reach this shrine starting from Guru Shikhar. People flood to this region to get the blessings of the triad of divinity and also the pleasing panorama of a different Rajasthan.

Nakki Lake is known for its possession of ubiquitous and unique rock formations. However, nothing comes close to Toad Rock View Point. The best spot in Mount Abu for clicking beautiful insta-worthy pictures. It is en route to the main trekking trail of Nakki Lake and it is also known as Mount Abu’s Mascot. The rock formation here are igneous rocks and these illustrious big boulders are shaped more like toads, hence the moniker. It is the most-visited destination in Mount Abu of Rajasthan and people come here to enjoy the natural geographic wonder this luscious zone possesses. The surrounding vistas of this mini green heaven is a noteworthy place of attraction for people who love to trek easily.

Between 11th and 13th century AD, several Dilwara Jain temples were built. They are considered as the epitomes of excellence in the field of architecture. These perfect specimens are built within a space of five different temples. Dilwara Jain Temples are less than 3 km from Mount Abu and have been chiselled out of white-coloured marbles. Intricate interior designs and craftsmanship from the floor to ceiling are sound display and match for the exterior beauty too. Another must-see destination in Mount Abu is Dilwara Jain Temple.

Although Mount Abu has a pleasant climate throughout the year, it is a beautiful experience to visit Mount Abu from November to March which is the winter season in Rajasthan and the rest of India.

Air : Udaipur is the nearest airport to Mount Abu (185 km away) while Ahmedabad is 221 km away is a highly preferred airport as it is connected to the rest of the Indian cities.

Road : NH 14 is the nearest highway to Mount Abu and so it is the best and easy way to connect this city with the rest of Rajasthan.