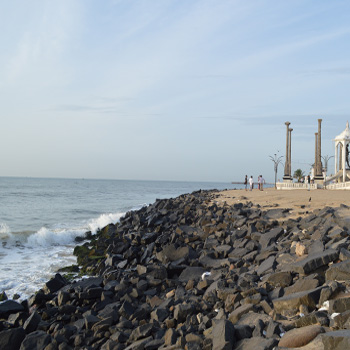 Whether it's a five year old kid or a fifty year old man, Beaches and oceans holds a great fascination. Its never-ending shores, sugar white beaches, sand castles and palatial sea foods are the reason for its fascination. Pondicherry is one such sea land, having surplus beaches.

This beach is called by many names, Gandhi beach or Promenade beach or Rock beach, lying just three km from the main bus stand. This beach is located just at the core of Pondicherry, which gives it easy accessibility and also attracts more tourists. It got its name as rock beach as its shore are embedded with black rocks and there is a Mahatma Gandhi effigy, which is why it is also known as Gandhi beach. This beach has the best promenades and is the apt place for a peace of mind. It will be a most cherished experience as you stand on the craggy rocks and let the wave caress you.

Gandhi Statue : Mahatma Gandhi "The father of our Nation" stands atop on a pedestal in front of the Promenade beach. This effigy is encased by eight granite rocks and the floor is furnished with marble. Do visit this effigy and take a selfi with Gandhiji.

Jeanne d'Arc : Besides Gandhi statue is the Effigy of Jenne d'Arc, a powerful women fighter in France. As Pondicherry was under the reign of French people, we can witness lots of statues of French people and soldiers.

War Memorial : Like adding more beauty to the promenade beach is the War memorial, this is dedicated to all French soldiers who have shed their soul and blood in the Second World War.

Activities There is a long pavement along the shore, where you can go for cycling, skating and rambling. You can also surf in the waters or go for a ferry ride.

This beach is located at the center of the city and so there it can be easily reached.

Bus : To reach Pondicherry, Chennai is the best option, as it has surplus busses for Pondicherry; from Pondicherry bus stand hire a taxi to reach the beach.

Airport : Promenade beach is just 7 km away from Pondicherry airport