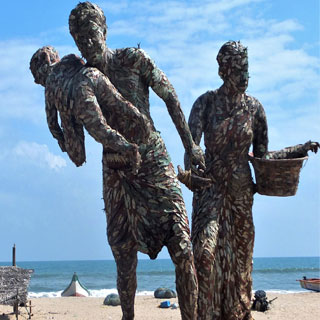 Pondicherry is the union territory comprising of the four coastal enclaves, Mahe, Yanam, Karaikal and Pondicherry though they are physically separated from each other. Pondicherry has lot of surprises to pause and wonder unlike the conventional tourist locations where you have tight schedules to visit all the places at one go. If a traveller wonders about what to do in Pondicherry, the answer is “Do everything and Do Nothing”. Yes, Pondicherry has something to offer for every kind of travellers eager to explore the city.

The city is popular among the tourists for the less crowded beaches, spiritual centres, multi cuisine eateries catering with variety of dishes, the colonial buildings and lot more to the surprise of the first time visitors. As Pondicherry was under the French rule for more than a century, the city still beholds the charm with its architecturally splendid buildings and the cuisines.

Out of the several locations in Pondicherry, the Veerampattinam beach is the most tranquil location and highly unpopular among the travellers. If you have an inclination to know about the life and culture of fishermen and their families, Veerampattinam will tend to give you the answers for most of your questions.

Veerampattinam is the largest village on the coastal line of Pondicherry and it lies between Pondicherry and Cuddalore. Autos and Taxis apart from the public transport frequently ply to the village which is at a distance of just 7kms from the city centre. Veerampattinam has one of the longest coastlines in South India. The village has a close relevance to the Arikamedu village. Arikamedu is popular for the archaeological excavations. Historians record that Arikamedu has got maritime commerce connections with Rome and Greece since second century B.C. Arikamedu has continued to be in significant limelight through these years. The coins, potteries, bricks excavated from this site clearly indicate the intense trade happened between Arikamedu and other countries. Also, the domestic trade had reached its peak across the cities and villages geographically in line with Arikamedu on the banks of the rivers.

Veerampattinam is popular in this region for the annual car festival celebrated in the Sengazhuneer Amman Temple. The presiding deity is Sengazhuneer Amman, one form of Goddess Shakthi. The history behind this temple is very interesting. Centuries back, when the fisherman Veera Raghavan was searching for a catch with his net, he got something heavy. It was not a catch as he thought, but a large wooden log. Following certain incidents, a temple was built for the Goddess and the wooden log was used to sculpt the idol of the Goddess Sengazhuneer Amman. During the Tamil month Aadi, that is during July-August, the car festival is celebrated in a grand manner and on subsequent Fridays in that month, special rituals and poojas are done.

The last or the Fifth Friday of the Aadi month is very auspicious and the Chariot procession is done in a very grand manner. Thousands of pilgrims from the nearby villages arrive at Veerampattinam to take part in this annual festival. The chariot is taken on procession through the streets and the devotees take it as a blessing to pull the chariot for a short distance. Several special poojas and rituals are conducted after the chariot returns to its halting position. This marks the end of the festival.

The village Veerampattinam has one of the longest beach and most beautiful beaches in the south of India. This attracts tourists from all over the world. A large number of people sun bathe and relax on the beach almost round the year. One can also watch the fishermen ply their trade and working with traditional fishing nets at dedicated sites.

Veermapattinam beholds the beauty in its coastal line and the lifestyle of the fishermen which can be enjoyed to have a different king of experience unlike the conventional touring destinations.

Train : From the Pondicherry railway station, the Veermapattinam is at a nearby distance of just 8km via Cuddalore Road.