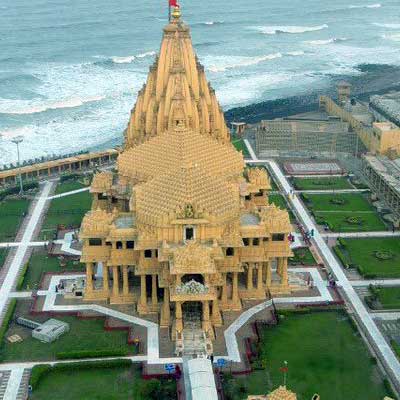 Close to Veraval in Saurashtra in the western dry zones of Gujarat, Somnath Temple is a symbol of bliss and blessings in Prabhas Patan. It is the first of the 12 Jyotirlingas of Lord Shiva. Mahadev’s divine vibe is all over the Somnath Temple, an important spot for pilgrims and tourists. After numerous attacks by the Islamic invaders, the temple was many times refurbished, repaired, and rebuilt in the yester years. The current temple is a brilliant Chalukyan model, supported by a Hindu Temple architecture. It was built in May 1951 and the reconstructing of the shrine was consecrated by the iron man of India - Sardar Vallabhai Patel. The confluence of three spiritual rivers Hiran, Kapila, and Saraswati forms the Triveni Sangam, a promising ancient pilgrimage site, which is now called Somnath. The shine of SomaMoon god is said to have been lost due to a curse and so he drenched in River Saraswati to rejuvenate the whole lustre. The outcome is the waning and waxing of the moon, without doubts, it is indirectly connected to the waning and waxing of the tides around the location of this scenic sea. Prabhas means lustre and this town also has an alternative moniker called Someshwar and Somnath. The God of the Moon.

How to reach Somnath Temple?

Rail : SMNH is the railway station code of Somnath and is connected to most of the important cities of the country.

Air : Major airports of the country don't connect with Somnath often and so regular flights are not available. Ut Somnath is close to Diu Airport (DIU), just 63 km away and Porbandar Airport (PBD), another airport in Gujarat is just 14 km away.

Road : Somnath Bus Station is well connected to the rest of the major parts of the Indian SubContinent.