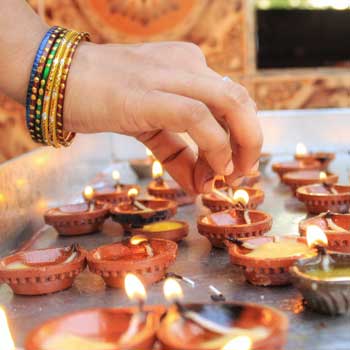 Thrikarthika - The Festival of lights

Thrikarthika, is the festival of lights celebrated in Kerala on the Kartika Nakshatram (star) in the Malayalam month of Vrischikam (mid-November to mid-December). It usually falls on the full moon day in the month. On that day after sunset all the houses, streets and temples are well lit with traditional oil lamps, made out of clay called Chirad. The festival is mainly observed in South Kerala.

This festival is not dedicated to any particular God or Goddess in Hindu pantheon. But some people do claim that is dedicated to Shakti – popularly known as Bhagavati in Kerala. Some people claim it is an ancient form of nature worship. Some people consider this day as the Birthday of Goddess Parvathi, consort of Lord Shiva. One day prior to Thrikarthika people clean their houses and its surroundings in order to welcome the Goddess to their houses. They wear new clothes, exchange small gifts with each other. One of the specialties of this day is that people never use crackers as this day is considered as the day of Peace & Silence.

On the Thrikarthika day after sunset, houses, streets and temples are decorated with special oil lamps (lamps made out of clay, referred in Malayalam as chirad) and candles as an offering to Goddess on her birthday. The stems of banana (plantain) and tender leaves of coconut tree are used to decorate the Thrikarthika lamps. The lamps are placed on the banana stems supported by coconut leaves.

People who have domestic animals also decorate the cowshed and other places used by animals. Special food is prepared using Tapioca, elephant yam and other tubers with lot of grated coconut on the day and is known as Kartika Puzhukku. Traditionally in Trivandrum ,'ella appam' is prepared rather than the puzhukku.

The full moon night and the Thrikarthika lamps complement each other giving an awe inspiring feeling to the viewers. In 2015, the date of Thrikarthika is on 15th December.

On the same day, Tiruvannamalai Mahadeepam is held in neighbouring Tamil Nadu. Tamil people celebrate this as the birthday of Lord Murugan.