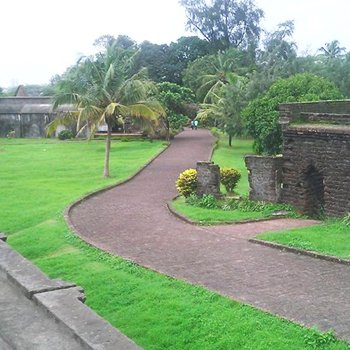 St. Angelo Fort is located in Kannur, is one of the 14 districts in the state of Kerala. Kannur district is also known as the land of looms and lores, because of the loom industries functioning in the district and festivals held in temples. The district is a major centre of Theyyam and ritual dance of northern Kerala.

St. Angelo Fort (also Known as Kannur Fort or Kanuur Kotta), is a fort facing the Arabian sea and it is situated 03 Km from the town of kannur. It is separated from the sea by a huge wall, it is triangular in shape and made of laterite stone. This fort was constructed by the viceroy of Portuguese named Don Francisco De Almeida. Inside the fort there are rooms for punishing the prisoners, they are kept in dark rooms which had just a hole for supplying the food. Once the food is supplied that hole will be closed and the prisoner has to sit in the dark. There is also a chapel inside the fort.

At present some parts of the fort has collapsed, even then it is not in a bad state. As this is a historical monument many tourists visit this fort. It is very beautiful to take a view of the sea and the surroundings from the top of the fort.

Tourists are allowed entry to the fort every day of the week between 08.00 hrs to 18.00 hrs. There is no entry free for the Fort also Video camera and still camera allowed with free of cost