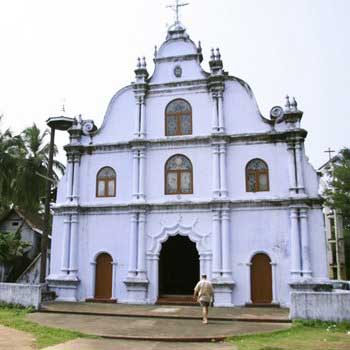 St. Francis CSI Church, in Fort Kochi (aka. Fort Cochin), originally built in 1503, is the oldest European church in India and has great historical significance as a mute witness to the European colonial struggle in the subcontinent. This centuries old church at Fort Kochi was originally built completely of timber and later reconstructed in stone masonry. It was restored in 1779 by the Protestant Dutch, converted to an Anglican church by the British in 1795 and is at present governed by the Church of South India. The Portuguese explorer, Vasco da Gama, died in Kochi in 1524 when he was on his third visit to India. His body was originally buried in this church, but after fourteen years his remains were removed to Lisbon. The tombstone still remains.

The Church was declared a protected monument in April 1923 under the Protected Monuments Act of 1904. As a protected monument it is under the Archaeological Survey of India but is owned by the North Kerala diocese of Church of South India. It has services on Sundays and commemorative days so visitors are not allowed on Sundays between 8:00am and 11:30am. On weekdays it is kept open for visitors (Visiting time 9:00am to 5:00pm). Still camera is allowed to use but Video camera is not allowed inside.