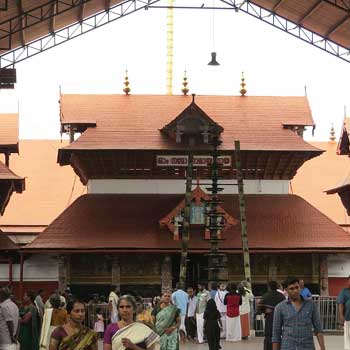 Mamankam, the war between the Zamorins and raja of Valluvanad at the bank of Bharathapuzha in Thirunavaya was the most famous event related to the historical importance of the Guruvayoor Temple. The war lasted for very long period so people around that place prayed to Guruvayoor Appan, the lord Krishna. Even the Zamorins became a devotee of Guruvayoor. Due to this war the temple became famous among the people. Dutch, Hyder Ali and Tipu  Sultan invaded the temple due to which most of the wealth is lost. The reference to this temple is mostly found in the 16th centuries.

The temple tank is called as Rudratheertham by the devotees. It is because lord Shiva worshipped Vishnu near this pond due to which the water is called by his name “Rudra” means “Shiva”. The legend says the pracetas, the son of mythical king undergone tapas here for 10,000 years seeking blessings of lord Vishnu to become the king of kings. Lord Shiva appeared from the pond and asked him to chant Rudragitha to get his blessings and he achieved his wish by the blessings of lord Vishnu.

Janamejaya the grandson of Pandavas was afflicted with leprosy. He had no hope for his cure from that disease. Sage, Atreya sought refuge at Guruvayoor to seek his blessings of lord Shree Krishna. After 10 months of staying there he was cured from the disease by the lord Krishna.

During the month of June to September, Krishnanattam takes place for which prior booking is needed. This special puja is done to remove the effect of poison, wellbeing of unmarried ladies, iradicate enemies, fulfilment of vows, eliminate poverty, for attaining salvation of the soul etc.

By air: the nearest international airport is Kochi (80km) and Calicut (100km)

By rail: Guruvayoor has railway station which is connected to the Chennai- Mangalore ways through Thrissur. One coming from Mangalore get down at Kuttippram station.