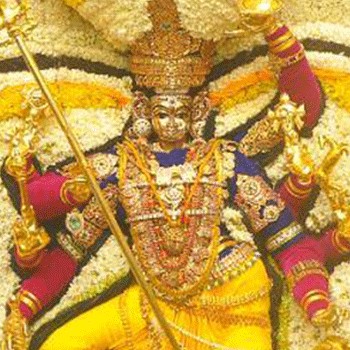 At a distance of 20 kms from Thiruchendur is the Kulasekarapattinam. This port city is built during the reing of Maravarman Kulasekaran, for the purpose of collecting tax on Salt and pearl export. This temple was erected in the belief that, the goddesses here will be a watch guard of this Village and will help her devotees during their hardship. Likewise this Goddess turned to be more powerful and pious. While the king stayed in this port city, he built a temple for goddess Durga, facing North at the North East corner of the city. He decorated this deity with a chain of Pearls and hence the goddess was called MUTHAARAMMAN. This is an ancient temple of about 300 years old.

As per the tradition of this temple, devotees will transform themselves as Goddess Kali, Kings, Monkeys, Beggars etc and they will beg, in the streets of nearby places. The money collected will be given as an offering to Goddess Mutharamman. And also people suffering from small pox, chicken pox, and eye problems will be delivered from their pain, if they visit this temple.

The legend has it that Goddess Amman appeared in the dream of a sculptor and ordered him to carve a statue of her and give it to the priest from Kulasai. Ergo the Amman is named as Mutharamman, as she herself wanted to carve her idol.

Next to Mysore, Kulasekarapattinam celebrates Dasara (Dussehra) in a grand manner for 10 days. The grand celebrations will commence on day 1 with the flag hoisting in the temple. Every year Dasara festival is celeberated in September or October. Maha Shivaratri, Ragu Pooja, Villaku Pooja are some other festivals commemorated in this temple.

Every day, goddess Mutharamman is taken to procession in the streets, decked up in different forms of gods and goddesses grandly. On the 10th day, the goddess takes the form of Mahishasura mardini at 12 midnight on the beach, riding a lion and slaying the demon Mahisha. This slaying is known as “Soorasamharam”. This will be followed by burning of colorful crackers. This is the climax of the festivity, called Vijayadashami on the 10th day, when slaying of the demon Mahishasura is performed by Devi Mutharamman on the shores of this village, symbolizing that dharma uproots adharma. On this 10 days fete, lot of people gather and engage themselves in dance and prayer. There will be variety of programmes, such as folk dance, and mask show.

After visiting this temple you can go to Manapad Beach, Sri Devi Jakkamma Temple and Veerapandiya Kattabomman Memorial Fort in Panchalankurichi.

Air:Thiruvananthapuram and Tuticorin airport is handy to this temple.

Bus:There are bus facilities to this temple from Thiruchendur, which is only about 12 km away from this temple.