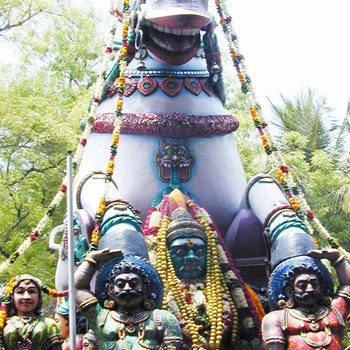 Madapuram Bathra Kaliamman temple is located at a distance of 25 kms from Madurai. The main deity here is Goddess Bathra Kali and the prime tree is Neem, this temple is 500 to 1000 years old. This archaic temple is situated in Madapuram in Sivagangai district.

It is believed that, the Goddesses here can bring all kind of glory to her devotees, and she is powerful enough to ruin all the black magic and evil spirit that has been with the devotees. She is also the Goddesses of prosperity, and so even billionaires and millionaires worship here, to make their business flourish further. The ones who had lost their money or been robbed, will cut the coins in front of Kali, to get their money back.

There is a tradition that, her admirers disguise themselves as Kings, queens, monkeys, and Goddess and will begin collecting money from the streets and the money collected by this will be offered to Bathra Kali Amman.

To soften the fury of the goddess, devotees offer garlands made of lemon fruits. They also offer Sarees to the goddess

Thirupuvanam Shiva temple, Thiruparankundram Murugan temple, Meenakshi Amman temple and Azhagar Kovil in Madurai are the other famous temples near this Amman temple.

Bus:Madapuram village is in Sivaganga district, buses are available from Madurai and Trichy, to Sivaganga, and there are local buses to this temple.

Train:There is a railway station at Sivaganga, from there take a taxi or auto to reach the temple.

Airport:The nearest airport to this temple is at Madurai.