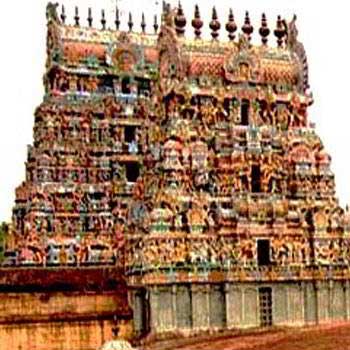 The presiding Lord Shri Agnipureeshwar graces majestically from his sanctum sanctorum. This temple is very ancient and is visited by many locals daily. This is also one of the powerful Shiva shrines in Thiruvarur district

Mandhiniar was a pious devotee of Lord Shiva. Once she was paying tribute to Lord Shiva and her son Banasura helped her to continue her penance by bringing lots of Shiva lingams. He came to Thirupugalur to fetch a Lingam but he couldn’t even shake it. He gathered all his force to pluck out the Linga but all resulted in vain. He got frustrated and was about to end his life, and then came the echo from the sky saying that “I will make myself present during your mothers pooja”. As per the voice the Lord himself presented himself to Mandhiniar’s pooja and then went back to Thirupugalur.

Vaikasi Pournami is a ten days long fete celebrated with grandeur and Thiru karthigai, Pradhoshams, Diwali are some other important festivals in this temple.

Sathayam starrers visit this temple often to get rid of their struggles in marriage, child born and business loss.

The Agazhi (a deep and broad water body letting crocodiles inside specially constructed around castles and palaces to prevent easy access to enemies) dug by Banasura still exists here. Lord Vinayaka in this temple is praised as Lord Gnana Vinayaka.

This is the sacred land where Saint Thirunavukkarasar respectfully known as Appar Adigal attained salvation after serving the Lord by cleaning Shiva temple grounds and paths to enable devotees to walk comfortably with an instrument in his hands called Uzhavaram. Appar festival is celebrated with great harmony in this temple, which is a ten days festival during which Appar’s endeavours to attain salvation are enacted to the public.

There are two shrines in the same temple for Saint Appar Adigal and Saint Sundarar. Lord Agnipureeshwar (Swayambumurthi), also praised as Sharanyapureeswarar, Pratyaksha Varadar and Konapiran is gracing devotees from a shrine. Mother Karundhar Kuzhali, also praised as Soolikambal blesses devotees from another shrine. Lord Vardamaneswarar and Mother Manonmani are in a separate shrine. Muruga Nayanar served Lord Vardamaneswara by preparing garlands for Him.

This is also the place where Agni Bhagwan worshipped Lord Shiva and got relieved from a curse. Here he appears in a rare form with 7 hands and four horns.

This is the place where Lord Shiva changed the bricks into gold bars for Saint Sundarar. Devotees those who build new houses bring bricks to the temples for vasthu and bhoomi puja to make the new building all prosperous. Also, Mother Karundhar Kuzhali was gifted with a piece of land for her services as a mid-wife to a woman in labour pain and is praised as Soolikambal. A belief is in the hearts of the people that there will be no infant or maternal mortality in this place as Goddess Sulikambal is guarding them.

The temple has a single shrine for Emperor Nala and Shani Bhagwan in the temple. The legend has it that when king Nala came out of his bath from the river Bana an echo was heard from Shani Lord stating that if the king take bath in the river at Thirunallar he will be relieved from his planetary effects and will succeed as a great king. Hence the Shani lord here is known as Anugraha Shani (mercy).

The grace of Mother Karundhar Kuzhali towards her devotees is boundless. Sool in Tamil means pregnancy. As she took care of a woman during her labour time and ensured safe delivery of the child, she is praised as Sulikambal. Women strongly believe that nothing untoward would happen to them or the child as they are under the direct grace of Mother Sulikambal. People pray to her by offering vastras for child boon.

This temple is noted for Vasthu benefits (house construction), smooth delivery and happy wedding. Devotees bring the first stone of their house and perform Vastu pooja for it in order to guard their houses from evil spirits.

Devotees worship Goddess Ambika with garlands and clothes for betterment in their life and also for child boon.

This ancient temple is in Thirupugalur near Thiruvarur.

Bus : Buses from Thiruvarur will take you to this temple.

Train : The nearest railway station is at Nagapattinam.

Airport : Trichy International airport is easily accessible to this temple.