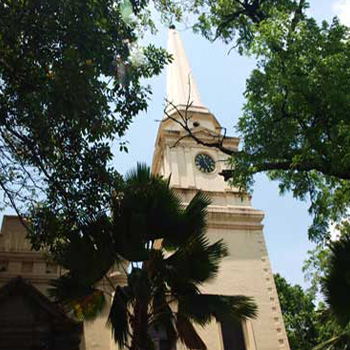 This church is an oldest edifice constructed in the British style of architecture in India housed at Fort St. George in Chennai, the capital city of Tamil Nadu. This ancient British Anglican Church is proudly called as “Westminster Abbey of East”. The antiquity and culture are beautifully portrayed in this famous cathedral.

Sir Streynsham master, who was representing the East India Company in Chennai, realized the need of a Chapel for the religious practices and rituals. So he started the construction of a Church on the Lady Day, that is, on 25th March 1678. The consecration ceremony was conducted on 28th October 1680. Within such a short span of time, the magnificent building was constructed in the British style of Architecture. As the building had a bomb-proof roof, it was used as a barrack and granary between 1758 and 1759 during the Second Carnatic War.

The architect was either Edward foule- master gunner of the fort St. George or William Dixon – chief gunner. The edifice consists of two broad alleys with a focal point jutting about 12 feet that forms a sanctum. To the west of the focal point, there is a commodious gallery that rests on the wooden Burma teak pillars which was once a seating place for the Governor. Two staircases were incorporated to the existed architecture in the year 1761, through which the galleries can be seen from outside.

Later in 1884, the architecture was once again revamped with gallery and a part was removed and thus raised as a new building. The tower that was constructed at the end of 18th century was not an original plan. It was built as per the order of Sir John Goldsborough. The steeple was built at the beginning of 19th century, in addition to this, two vestries were also built in the east of each alleys.

Altar and yard of the church:

An unsigned portrait of the last supper, an Altarpiece which was said to be a pure betray of Raphaelite school where Raphael himself sketched the figures, itt was brought to Chennai after it was spoilt by the British troops.

No such yards existed when the church was originally constructed. Those who left the world were buried in a Guava garden which is adjacent to the governor's house. The petition was sent to the chief engineer of the fort about this matter. Sir John called to relocate the graveyard to the north-west of an island. As per the order, the cemetery was relocated.

Many happiest and saddest moments happened here. The governor of St. George and treasurer of St, Mary's church, Robert Clive was married to Elihu Yale. He offered some amount of money to Yale University which was started in USA. Many memorial plaques and monuments exist in this church. The famous Bird artist Elizabeth Gwillim was also buried here.

By flight- The nearest airport is Chennai airport and the distance to reach the fort is just 21KM.

By train- The nearest is Chennai central railway station and the distance to reach the fort is just 3KM.