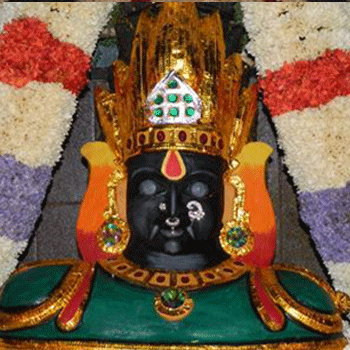 Vandiyur Mariamman temple is located close to river Vaigai, in the east of Madurai, at a distance of 3 kms from the World-fame Meenakshi temple. Although Mariammam Shrine is the prime shrine, the temple has also goddess Pechi ammam and Lord Ganesh beside a Peepul tree. It is an ancient temple which is 2000 years old. The moolavar here is Mari Amman and the sacred water is the theppakulam.

Built in 1646 by Thirumalai Nayak, the center of the tank holds an idol of Lord Ganesh which is installed on a platform.

According to legend, the place was found when the earth was dug to make bricks for constructing Thirumalai Nayakar Mahal and later the place was converted into a tank, dedicating to lord Ganesh then.

The celebrations take place on a full moon night and the pristine water turns colourful as if the temple is fully lit. The idols of Goddess Meenakshi and her consort Lord Sundareswarar, the deities of the Meenakshi temple, come down to the tank in colourful floats, presenting a mesmerizing sight. Pilgrims across India come to Madurai to participate in the festival.

Mariamman Temple in Madurai holds a separate place in the hearts of Madurai people, as the goddess’s power has no limits and she is considered to be the watching guard of Madurai. Nothing begins in this land without worshipping Mariamman. People with eye sore, small pox, seeking child boon and marriage, will be relieved from their ill luck. The abhisheka water in this temple has many magical powers and can cure Small pox, chicken pox and eye problems. And also people with skin diseases offer salt and pepper to the Goddess. On Fridays and Tuesdays devotees light lemon lamps along the plank for better life and fortune.

Near by Places to Visit:

Bus : Buses from Madurai Periyar Bus stand will take you to this temple, or else you can also take taxi.

Train : From Madurai junction this temple is of 30 mins drive. Both bus and auto facilities are there to reach this temple.

Airport : Madurai airport is the nearest one, it is rather good to prefer cabs from the airport to this temple than buses.