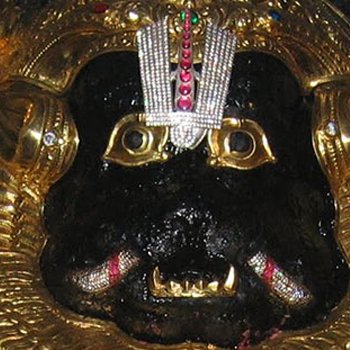 Yoga Narasimhar is a bygone temple located at the foot hills of Aanai malai hills in Madurai. This temple is one of the rock cut temples in India and is an excellent exemplar of the Pandya architecture.

The legend has it that Lord Shiva was prone to BrahmaHathi Dosham as he beheaded the fifth head of Lord Brahma. In order to get rid of the sin he visited this temple and took bath in the Chakra theertham (pond) and later he got cleansed from his sin.

From Melur this temple is at the distance of 8 km and from Thirumohoor it is 4 km. This place is called as Narasimham.

This place is also known as Gaja Giri Kshetram (due to the salvation given for Elephant). This temple is an example of cave cut temple (Kudaivarai temple). This temple is constructed by breaking a huge piece of rock

Entrance of the Temple

There is a lotus Pond, filled with full of lotus flowers. A devotee is expected to wash his legs in the pond, but with care that he does not go deep into the waters but just enough to clean the feet.

The Main deity Moolavar is the Yoga Narasimhar, He has a lion face, and Goddess Lakshmi in his heart. The offerings to him are a Lemon and Chandanam(sandal). The Urchavar is in the form of Narasimha, he is very special as he is seen in standing posture which is not seen anywhere else and has a weapon in his hand. One may give, Tulsi flowers, coconut, Lotus and other Flowers and light Ghee lamps. Special archanas are done on request.

There is a grand fete celebrating the day on which Lord Vishnu delivered an elephant named Gajendra from the clutches of a crocodile and this day is named as Gajendra Moksha festival which is commemorated on a full moon day in Masi month.

Swathi Thirumanjanam – Abhishek with Turmeric on the day of star Swathi, Pradosham Thirumanjanam - Abishek with Turmeric on the day of Pradosham, are performed. On Maasi Pournami day, Kalamegha Perumal of Thirumohoor Divya Desam makes a trip to the Yoga Narasimha temple here in Narasingam and the Gajendra Moksham episode is enacted here. On this day, an oil Abhishek is performed for Lord Narasimha.

This temple is located at the foot hills of Aanai malai near Madurai.

Bus:There are surplus buses from Madurai mattuthavani bus stand to this temple. There are also share auto facilities for this temple.

Train:Madurai is the nearest railway station.

Airport:Madurai international airport is the nearest one.