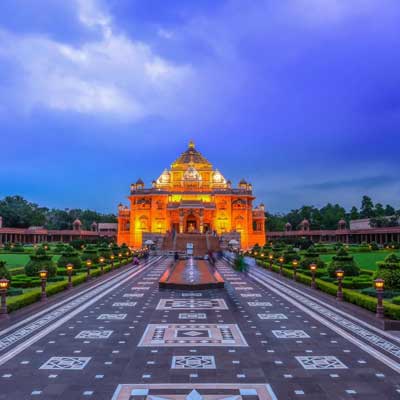 Gujarat’s largest city is also a colourful metropolis destination of India. Ahmedabad is a classification of palpable palaces, great food, museums, mosques, amicable accommodation, and everything an international traveller would expect in an Indian city.

Ahmedabad is more than 600 years old and it is a ubiquitous union of art, culture, heritage, history, and profound industries. The contender of India’s first World Heritage City. Paris headquartered UNESCO has given Ahmedabad the honour of the World Heritage City for its omnipresence in India’s cultural and heritage background. Being one of the medieval cities of Gujarat, Ahmedabad is popular for the historically beautiful attractions and monuments. It connects with the travellers of the world on all levels.

The number destination in India for family travellers and anyone who desires to learn about the importance of Indian Medieval History and architecture. As places like Ahmedabad have gone into the hands of numerous empires and emperors, the number of dynasties that had been in this territory have contributed to the vastness of West India’s heritage and legacy. Art galleries and museums, architecturally sound historic monuments and structures, country cuisine, busy marketplaces, and vibrant urban areas connect with the timeline of Ahmedabad in different ways.

Starting from the non-violent building of Sabarmati Ashram, standing as tribute to the nation’s father to the remains of Ahmad Shah’s and his queen’s timeless tombs, there is beauty etched everywhere in Ahmedabad. Teen Darwaza is one such masterpiece which has the longest gateway in the whole city. Consisting of intricate carvings, elegantly arched gates, and semi-circle resembling window openings with beautiful Jaali work, from its surreal story to artful aesthetics, Teen Darwaza is a marvel. Jhulta Minar or Shaking Minaret or Sidi Bashir Mosque is a popular place to see in the city. While Rani Rupmati’s mosque is famous for its excellent architecture and steadily carved mighty minarets.

As a textile hub, Ahmedabad is famous for the Calico Museum of Textiles. The famous antique textiles of India are home to this region of Gujarat. Similarly, Shreyas Folk Art Museum speaks about the artistic flavour of the urban spaces. Ahmedabadi textile is popular and as an icing in the cake, there are handicrafts and Gujarati clothes. These are lined throughout the entire span of Manek Chowk. An array of street shops line up this particular budget shopping arena. Likewise, Navaratri celebrations are famous while Uttarayan or Kite Festival and Durga Puja are famous too. Colourful flights lighten up the already vibrant landscapes of Ahmedabad and even celebrities like Amit Bachchan show up during these festivals. Such charisma is brought to light during the Kite Festival.

Similar to Rajasthan, Ahmedabad in Gujarat experiences a hot climate during March to May, and so travelling during October to March is a good idea, as Kite Festival comes in during January time. While Monsoon months from July till August contribute to a conducive time for long stays. However, Sabarmati flows in her fullest form during this part of the year.

Rail : Kalupur Station is the main station here and with the help of Western Railways, this station in Ahmedabad connects well with the other cities and states of India.

Road : With the help of NH 8, Ahmedabad Municipal Transport Service connects the cities of Surat, Bhavnagar, Pune, Mumbai, and Shirdi.