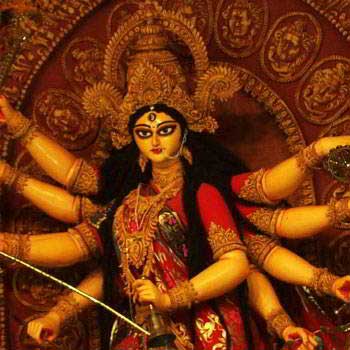 Among the different states of India, once you hear the name Dussehra, you are immediately reminded of the beautiful Mysore City for the grand ten days celebrations.The grand annual Hindu festival that falls on the full moon day in Hindu calendar “ashvin???- dussehra (duss- 10 in Hindi). Also called as “Vijayadashami??? which means the triumph of good over evil. The first nine nights are celebrated as navaratri (Nava- nine, ratri- nights). The tenth day as “Vijayadashami???. Every year in the months of September and October in Gregorian calendar, this major festival is celebrated. Festival is same, but the way of celebration is unique in each states of India.

The legend goes like, there was a demon named mahisasura who interrupted the life of common people. In order to safeguard their life, the people worshipped Goddess Durga. Pleased by their worship, Goddess Durga Devi assassinated the wicked demon. So, this festival is to commemorate the victory of Durga Devi over the evil demon. This way of celebration is found in eastern and north eastern states. Other legends portray that, there was a ten-headed king named Ravana who ruled srilanka, abducted the divine consort of king Rama. Soon after her abduction, king Rama rescued his wife Sita and killed Ravana. This is remembered in the celebrations across the north, south and western states of India.

How do they celebrate?

The dussehra celebrations takes place in Mysore palace as “naada habba???- the festival of land. The Royal Palace of Mysore will be grandly decorated with around one lakh lights. Breath taking cultural events rehearsed for days together will be performed on the day of Dussehra.

The major attraction of the Dussehra is the procession of embellished elephants. Among them the leading elephant will carry the idol of Goddess Chamundeeswari, the famous and most revered Goddess of Karnataka. The procession will be followed by numerous artistes playing musical instruments and performing different forms of dances. The procession will come to a halt at a place called bannimantap, where there is a banni tree considered as auspicious and sacred.

This is a platform for Women and young girls to dress up specially for all the nine days and they love to have a reunion of friends and families. Varieties of traditional food will be offered during the nine nights of navaratri. On the tenth day (maha Navami), the giant statue of king Ravana will be burnt and thus the people of Mysore will enjoy the reminiscence of victory of good over evil. Thus, Dussehra celebration in Mysore City reinstates the philosophy of life that Good always wins the Evil.