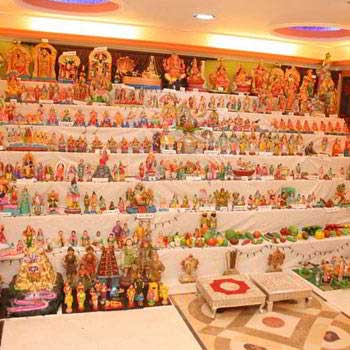 The colorful festival celebrated across the country deserving a special mention is the Navarathri celebrated for nine days. The three incarnations of the Goddess Parvathi as Durga, Lakshmi and Saraswathi are worshipped during these nine days. Metal or wooden steps in odd numbers are bedecked and the idols of the God and Goddesses are arranged decoratively called Kolu in the houses. The arrangement starts with the grass and plants in the lowermost steps, then insects, small animals, domestic and wild animals, human beings and Gods at the top row. This symbolizes the philosophy of attaining the salvation through leading a pious life. It is called as Vasantha Navarathri in North India, Durga Pooja in West Bengal, Kolu in Tamil Nadu and Dusserah in Andhra and Karnataka.

You will be mesmerized with the grandest durga poojas and celebrations in North India and the Kolu or the decorations in the temples of Tamil Nadu. In the world’s largest functioning temple complex Srirangam , you can enjoy the huge display of kolu in 35 different sets of steps. Same is the case in many other temples across Tamilnadu and also in other states. Celebrations for nine days accompanied by concerts, spiritual discourses and other recreations make everyone inclined towards spirituality. The most vibrant poojas and rituals in Kolkata Kali temple, lakhs of devotees dressing up like different versions of Goddess Durga in Kulasekaranpattinam of Tamilnadu and Goddess Chamundeeswari of Mysuru, in gorgeously decorated with the pageantry of elephants in procession deserve a special mention here.

Navaratri ends with Vijayadasami, symbolising the victory of good over the evil, the eternal truth. Religious celebrations are the strongest threads connecting the historic traditions and culture of India.