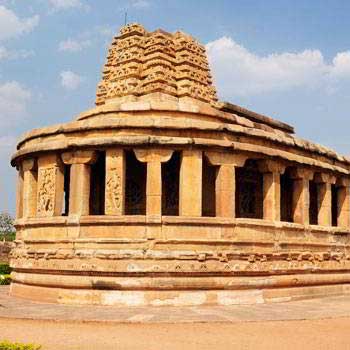 The cradle of Rock Temple Architecture, the city where there are around 125 stone temples believed to exist from the 5th century CE is the small village Aihole situated in the Baghalkot District of the South Indian state of Karnataka. It is at a distance of 500 kms from the state capital Bangaluru. Wherever you walk, you will  end up on the façade of a temple in Aihole.

The rock cut shrines and the huge figurines which have never got duplicated stand as a testimony for the past 1500 years portraying the Chalukiyan Architecture who have reigned this area headquartered at another historic city Badami. It is surprising to know that the excavations have revealed magnificent structures dating to pre-chalukian dynasty, that is, building built even before 5th century. The architectural styles deployed and the grandeur in which the structures and the shrines have been built have got the accolades to Aihole that it is renowned as the Cradle of Rock Temple Architecture.

The most successful Chalukian King, Pulikesin II, after conquering the King Harshavardhana, ruled this part of the state. Though he was following Vaishnavism, he respected all the religions and built temples symbolizing his love and care for all sections of his citizens. The construction works commenced by him have continued till the 12th century. But for the commitment and perseverance of our forefathers, we would not have got the treasure of these awesome temple city. Mortarless Assembly, more preference to length rather than height or width, ceilings which are richly carved and flat roofs and the aesthetic sensibility of the sculptures which are uniquely designed are the significant features of all these structures. Though it is called Chalukian Architecture, historians record that the chalukian artisans have incorporated the prevailing styles of North Indian, South Indian and Deccan to make a right blend of all these constructions. Even though most of the buildings are claimed to be an experimental constructions, people visiting this place do not feel so, as every premise is complete in all aspects in turn attracting lakhs of visitors every year.

The places that will kindle your interest to know more about the culture and tradition of the Chalukian Dynasty are, Lad Khan temple(the ancient of all structures), Durga Temple complex, Jain Basadi, Jyothirlinga Group, Galaganatha temples (Around thirty temples situated adjacent to each other) and Hachappaya Matha.

Come to Aihole and the visit will take you on a time machine to the Chalukian dynasty with its everlasting architectural marvels.