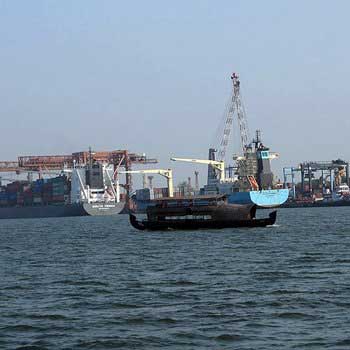 Kochi is said to be the cosmopolitan hub of Kerala, also a major Port City in India. It is a fast moving city with a fusion of people, belonging to different cultures and different parts of the country who made Kochi their home. At present more than 2 million people reside at Kochi. It has developed into a major tourism hotspot for those who visit India. Kochi was previously known by the names Cochin and Ernakulam, which the people still use.

Until Early 14th century AD, Kodungallur Port was the preferred trade center for the local traders as well as the foreign traders from China, Middle East and Russia. It was during 1341, when Kodungallur Port was wiped out following a flood and the traders moved to Kochi resulting in the emergence of one of the leading Port Cities in India. The Portuguese were the first to establish their base at Kochi, from when the colonization of India started following the Dutch, who ruled for decades until 1814 when the British took control as a result of the Dutch treaty.

Fort Kochi, which comes under Kochi Municipal Corporation is the historical center in Kochi. One who walks by the streets of Fort Kochi will feel as if he/she had travelled back to an ancient European city of the 16th century. Mattancherry is another neighboring historical town which offers a lot to its visitor’s. The locals say, long before the chery [street] was full of lined butcher shops selling mutton, and hence the name “Mattancherry”. There are a lot of activities for the visitors at Mattancherry and Fort Kochi.

At present, the merger of municipalities Kochi city [formerly Ernakulam], Fort Kochi and Mattancherry together is known as “Kochi”.

"Cheena vala", described as Chinese fishing nets in the local jargon used by the fishermen and many others at Kochi are a major attraction for tourists. It is in practice for more than half a millennia on the Kochi coastline. It is believed to be the Portuguese, who brought these nets to Kochi from Macau, which was once a Portuguese colony. A contradictory thought is that these nets were gifted to Kochi Maharaja by the Chinese Emperor Kubalagi in the 14th century AD. Initially there were more than 100s of these, but now only 12 are in proper working condition. Visitors could buy fresh seafood as per one’s taste and even eat them cooked as there are many local stalls available with boards headlining “If you buy, I will cook”. Now, that is some good news for tourists as they could have a taste of fresh catch Kochi seafood on spot. A walk by the side of these fishing nets is also recommended.

Bolgatty palace, built on the Bolghatty Island of Vembanad lake in 1744 by the Dutch traders in India for their higher officials, still poses its beauty with pride. It is now directly under the Department of Tourism, Kerala, and has been transmuted into a heritage hotel with a vibrant fauna garden landscaped around it along with a swimming pool, a 9 hole golf course and an Ayurvedic center too. The stay at the hotel is for sure a lovely experience especially the lakefront rooms which are always in demand by the guests. The eye watering view from these rooms would fill in your heart with the pure Kerala charm. There are daily Kathakali shows for people who want to witness and experience the famous art form of Kerala. It is roughly 12 kms from the Kochi city, likely a 20 minutes' drive.

With 16 galleries constituting 500 artifacts including the multi-billion rupees worth Cochin Royal crown and crown jewelry, the Hill palace museum truly is a treasure for the art and history admirers. It was the former residence of the Kochi Maharaja, and thus houses the collection of the royal families along with old coins, old paintings, sculptures and so on.

It is 12 km southeast of Kochi city.

The palace, originally built by the Portuguese in the year 1555 was gifted to the Kochi Maharaja, Veera Kerala Varma [1537-61] gesticulating their goodwill likely to secure trading privileges. Later on after defeating the Portuguese and winning the rule over Kochi in 1663, the Dutch revamped the palace and thus the name “Dutch Palace”.

Hindu murals, describing various scenes from the Indian epics like the Ramayana, the Mahabharata and other puranic legends are elements of pure artistic brilliance and serve as the central attraction of the Dutch palace. The palanquins [hand carried carriages], the grand ceilings, the royal outfits of the king and family, displayed inside the palace will definitely inspire and startle the visitors. The palace is 10 kms from the city and is open for visitors from Saturday to Thursday, 10.00 am – 05.00 pm.

During the period of Crusades, in 11, 12, and 13th centuries Jewish refugees got settled at Kochi and this Synagogue was constructed in 1568. Paradesi means foreign, hence the name Paradesi Synagogue, a synagogue for the foreigners. The synagogue was destroyed in 1662 by the Portuguese as they attacked the Jews for supporting the Dutch who were challenging them to conquer Kochi. Soon after in 1964 the Dutch overpowered the Portuguese and reconstructed the synagogue. Inside the Synagogue there is a beautifully decorated golden pulpit and the hall is illuminated with gorgeous chandeliers and multi-coloured glass lamps catalyzing the beauty of brilliantly, hand painted floor tiles from china. The street on which the synagogue lies is known as the Jew Street as it is highly populated by Jews. There were a lot of Jewish families who found refuge there but as the time moved by many of them migrated to Israel leaving only few families now. There are a lot of antiques/handicrafts and spice shops on both sides of the Jewish street to look out for.

Located nearly 25 kms from Kochi, Cherai Beach is a lovely spot to spend some time with the waves and to soak up some vitamin D sunshine. The thick coconut groves lined up on the coastline provide us a glimpse of Kerala’s rich greenery.

The largest shopping mall in India, Lulu Mall is at Kochi. The infrastructure is huge with 1.7 million sq feet of retail floor lying over 17 acres. With more than 300 retail outlets including both international and local brands, the Mall promises to provide a delightful shopping experience. There are a lot of fun and entertaining activities at Lulu Mall which includes Lulu Mall bowling, a 5000 sq feet ice skating rink, video game consoles and the world class PVR cinema halls. Lulu Mall is open from Sunday - Saturday, 10.00 am - 11.00 pm. A multi-level parking facility is available which could accommodate upto 3500 vehicles at a time.

Other Activities in and aroud Cochin

Shows are available at various art centers in Kochi, specifically meant for tourists. One would get a brief and intricate detail about the traditional Kerala art forms like Kathakali, Mohiniyattam, Kalaripayattu [Kerala martial arts] starting from the makeup, introductory narration and followed by the performance of skilled artists. There are even Kathakali training centers for those interested in learning Kathakali art form. Yoga classes are also available every day morning.

There are various shopping complexes, malls, and streets at Kochi which would excite the compulsive shopping lover in you. Lulu Mall, Oberon Mall, Nucleus Mall, Gold Souk, Centre Square Mall and so on are well maintained and most visited shopping malls. The shopping street at Marine Drive and Fort Kochi are also worth visiting.

There are some great pieces of old Kerala architecture with beautifully carved sculptures and gopuras. Chottanikkara Temple, Kochi Shiva Temple are the two of the most famous and most visited temples at Kochi.

Travelers who visit Kerala have a unique opportunity at Kochi to learn about the Kerala cuisines which is of great demand these days. People interested in cooking classes can attend the same at a professional cookery instructor’s house, who is famous in Kerala. With prior booking, we can choose which package we need from the following-

a) Enjoying a meal

b) Attend cookery classes, also dine with them

Kerala Folklore Museum holds a lot of antiques belonging to the bygone era providing a worthwhile visit at the Museum. The Museum’s infrastructure is of classic Kerala style, designed using remnants of ancient temples. The Museum comprises of 3 floors covering 3 architectural styles of Kerala namely Travancore, Cochin and Malabar. The museum is open from 09.30 am to 06.00 pm.

Kochi has a moderate climate with day time temperatures averaging 30?c to 35?c and 24?c during nighttime. The summer starts by the month of February which is not recommended for tourists to visit Kochi. The temperature is not too high, averaging below 40?c, but the high humidity makes it harsh for some. However by the end of May, the monsoon season is active starting by the mid of May, when it begins with a mere sprinkle of rain leading to drizzle and finally showering upon the land of Cochin, inviting visitors from all around the planet. Also the temperature would drop ranging 25?c to 30?c during the monsoon.

The most suitable time to visit Kerala would be September to March, when the weather is fine and cool with a little bit of rainfall in between. For People who love to experience the monsoon, could visit during months of June to September.

How to reach Cochin?

By Road - Kochi can be accessed by various routes by road. Its neighboring cities are Alleppey, Kottayam and Thrissur which are 55, 70, 85 kms away on road. There are Kerala State Corporation bus services to Kochi, available from almost all parts of South India. Taxis, Autorickshaws and city buses are available for transport within the city and also for long distance.

By Air - The international airport of Kochi is at Nedumbassery , which is 35 kms from Kochi city. There are taxi services and Kerala State Corporation buses from the airport available 24/7 to all parts of Kochi as well as whole Kerala.

If all you want is to travel, and do wish to explore the “God’s own country” Kerala, which is rated as the top 10 destinations in the World, Kochi is where to start with. It is therefore rightfully called as a “Gateway to the land of coconuts”. There is a lot you can do at Kochi. Starting from the Chinese Fishing Nets to the Dutch palace, the sun lit beaches to the historical and educational museums, sea food to a spicy Kerala “Sadya” served on a banana leaf, Kochi has everything to satisfy different tastes of various winged visitors from all around the planet. The climate is so welcoming that you could visit Kochi likely any time throughout the year. Also being one of the major cities in India, and the commercial center of Kerala state, it is well connected by road, rail, and air which makes it easier for travelers from any part of the World reach Kochi and experience its charm and elegance.

If you want us to create your refreshing holiday trip, kindly fill in the Enquiry Form