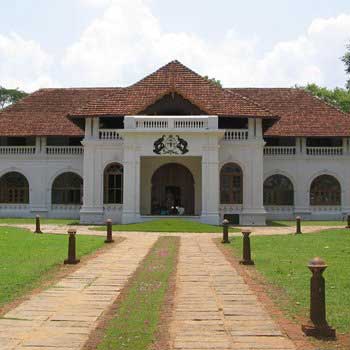 Thrissur is considered as the land of Poorams or festivals and the cultural capital of Kerala for a reason. The annual festival of Thrissur known as the Thrissur Pooram is one of the largest gatherings on Earth. It is celebrated at the Vadakumnathan Shiva Temple, Thrissur. The Name Thrissur is derived from the Malayalam name Thiru- Shiva- Peroor which means "The land of sacred Shiva". King Raja Rama Verma popularly known as Shaktham Thampuran, was the architect of the present day Thrissur town. Thrissur is a revenue district and a major commercial hub of Kerala. For people visting Thrissur, it has for them gorgeous giant waterfalls, ancient temples, Kalamandalam art institution, serene beaches and many more which can for sure educate them and refresh them from their busy tiring life.

Summer - Summer is hot and humid in Thrissur with highest temperature recorded of 38°c and minimum of 32°c. Summer Season at Thrissur is during March to May every year and is a fair time for sightseeing.

Monsoon - Season starts by June and ends by November. This is when the Monsoon hits cooling down the hot and humid land of Thrissur. This time is good to make a visit too, but sometimes heavy rainfall will be a problem in outing.

Winter - Winter starts by December and lasts till February. This is the best time to visit Thrissur. The lowest temperature recorded during winter is 18°c. The nights are cooler and the atmosphere is lovely all around, during the months the winter.

Thrissur is one of the major cities in Kerala and therefore t is well connected by all means of transport.

By Road - Thrissur is well connected by the National Highways as well as the State Highways. The neighboring cities are Kochi and Palakkad which are 82kms and 70kms away from Thrissur respectively. There are frequent buses available from these cities to Thrissur.

By Air - The nearest International airport is Kochi International Airport at Nedumbassery which is 58 kms from Thrissur city. From the Airport, there are taxi services and Government bus services available 24/7 to any part of the state.

By Rail - Thrissur Railway Station is located within the city, and thereby reduces confusion among its visitors. There are trains available from and to Thrissur from all the cities in India.

With a large area of Thrissur dominated by thick natural vegetation, it promises to entertain all nature enthusiasts, also with its rich cultural heritage and artistic history, it never disappoints an art enthusiast too. Witnessing the Thrissur Pooram and the mighty elephants wearing different Kolams [mask] and Netipattams is a spiritual as well as an exciting moment. Praise the splendor of the giant Athirampally Waterfalls. See how the traditional art forms of Kerala are stil preserved and passed onto the next generation at the Kalamandalam institution at Cheruthuruthy. At last visit the famous Guruvayoor Sreekrishna Temple which has a history of over 5000 years. Visit Thrissur and have an unforgettable experience at the land of cocunuts.