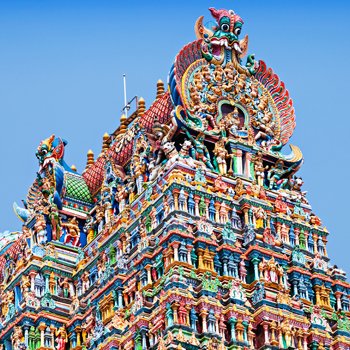 The aroma of Jasmine flowers fill the air of Madurai and give us pleasure as we enter its thresh hold. This is an important city in Tamil Nadu and has been held in high regards by many ancient poets. This is the place where Tamil language ripened many centuries ago and is a main commercial Centre in the southern zone. There are ample of places which are worth a visit and are best exemplars of the ancient Dravidian culture.

This dazzling city takes pride in being the capital city of the Pandiya kings and Thirumalai Nayakar. The architectural style here is greatly admired by all. Meenakshi Amman temple in Madurai is one of the famous temples in India. Apart from the architecture this city is famous for the South Indian spicy foods, scrumptious Jigarthanda and fluffy Idly (Rice cake).

The sun is at her high spirits in Madurai and so all day here are sunny days. In summer the temperature may reach to 40°c and on other days it lies between 34°C-25°C.

Meenakshi Amman Temple : Meenakshi Amman Temple is one of the temples which is very famous all over the world. This mind-blowing temple demands a second visit and the sculptures are so mesmerizing that they will make our eye balls glued to them. This marvellous piece of art is dedicated to Goddess Meenakshi and God Shiva and it is believed to be the place where they tied the knot. The golden lotus tank inside the temple adds feather to the hat of this temple. Another exclusive feature of this temple is the thousand pillar hall and the musical pillars. Every nook and corner of this temple is so amazing and attractive. Don’t ever miss an opportunity to visit this dazzling temple.

Thirumalai Nayakar Mahal : Goggle at the startling sculptures of the India’s icon the Thirumalai Nayakar Mahal. This monumental piece is housed on the East of Madurai and is always jam-packed with tourists from dawn to dusk. Each and every part of this Mahal is meticulously done and is emblazoned with giant pillars of 82 feet height and 19 feet width. This palace surpasses all other monuments in Tamiln Nadu. As if adding beauty to the beauty queen there is an awesome light and sound show during evenings at the dancing hall of this Mahal.

Gandhi Museum : In order to pay tribute to the “Father of the Nation” Gandhi Ji this archaic Palace has been renovated in to a memorial building. Its inspirational beauty and tranquillity attracts million a day. This place has profound collections of Gandhi Ji’s personal letters to Subramaniya Bharathi, Adolf Hitler and Nehru Ji, along with many rare clicks of Gandhi from his childhood till his assassination. There is also a blood strained vestment worn by Gandhi during his assassination, the plate, spoon, sandals and the spectacles used by him are all conserved in a vacuum glass box.

Thiruparankundram : Thiruparankundram is one of the six army camps of Lord Muruga. He graces majestically from the sanctum sanctorum with his spouse Deivanai. It is the folk lore that, this is the place where Muruga and Deivanai tied the knot. Apart from this temple there is also so a well maintained eco-friendly Park near the temple.

Chitirai Festival : Madurai is the city of festivals and is always busy with decorations and preparations. Chitirai festival that falls in April is the longest festival in the world that lasts for a month. During this period the whole city turns to be a boisterous one and is filled with josh. The first 15 days is dedicated to Goddess Meenakshi and the rest to Lord Alagar and on every evening there is God and Goddess march which is accompanied by thousands of people. Visit the city during this colourful month and enjoy the celebrations up to the core.

Bus : As it is a metropolitan city buses to all over India is available. There are three main bus terminals that are Mattuthavani, Periyar and Arappalayam.

Rail : Next to Chennai this railway division is the largest. There are direct trains to all over India and the railway station is well maintained with A/c waiting hall.

Airport : Madurai Airport is located at a distance of 12 km away from the city centre. It provides domestic and international flight services round the clock.