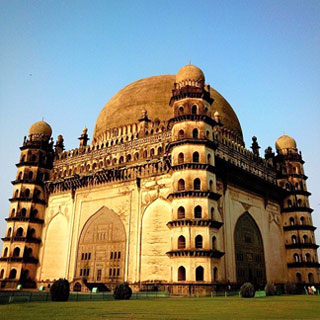 Bijapur, formerly called as Vijayapura is home to the Kalyani Chalukyas. Though Bijapur was under the reign of the various Kingdoms like, Chalukyas, Hoysalas, Rashtrakudas and Yadhavas for almost 700 years, most of the monuments in Bijapur were constructed during the period of the Mughal Kings like Khiljis, Bahamanis and Adhil Shas.

One such everlasting architectural wonder is the Gol Gumbaz and visiting this mausoleum is truly an unique experience. Gol Gumbaz is the popular tourist location frequented by tourists from India and abroad almost all through the year.  Mohammed Adil Shah, his wives and his daughters are laid to rest in this mausoleum. Situated very near to the Bijapur Railway station, the Gol Gumbaz comprises of two magnificent buildings. The first one called as the Naqquarkhana, the hall of the trumpeteers is now converted as a museum, housing number of artefacts through various centuries. Even the ancient porcelain articles from China are also found in the museum and the museum is maintained by the Archaeological Society of India.

A lush green well maintained lawn separates the Naqquarkhana from the main building of the Gol Gumbaz. Despite the scores of tourists trooping in and out every day, the cleanliness maintained inside the Gol Gumbaz is simply impressing. The huge dome, lotus petals around and the octagonal towers on all the four sides are the highlights of Gol Gumbaz.

It is an undeniable fact that though there is no ornamental structures or decorative constructions found in Gol Gumbaz, it can be definitely acclaimed as a geometric marvel of the Deccan architecture.  The huge dome with an 144ft diameter is an engineering wonder and is claimed to be the second largest in the world next to the St.Peter’s Basilica in Rome.

You can reach the top of the building through the staircases and you can walk around the dome to have the view of the Bijapur city. You can be one of those luckiest persons who runs into the hordes of parrots with beautiful red beaks frisking from one pillar to another. Experiencing the solitude of the ambience and listening to the whispers above in the gallery is quite possible if you plan to visit Gol Gumbaz around 6 o’ clock in the morning.

Ibrahim Rouza, Malik e-Maidan, Upli Burj, Jama Masjid and Shivgiri are some of the popular halts in Bijapur. Though the city is dotted with number of monuments, the above said are in well maintained condition frequented by travellers.

Bijapur is a city never to missed by a traveller eager to know more about the past history and culture of Deccan Plateau.

Air : Bijapur airport is well connected with the other major cities of the state from where you can easily reach the different tourist locations across the city.

Train : Bijapur Railhead is an important destination where trains from major cities around cross. A prepaid taxi can take you to the different locations.

Road : Bijapur can easily be reached from the other destinations of the state using the well connected network of roads and Gol Gumbaz is very near to the bus terminus. Local transport can be used to visit the other locations across the city.