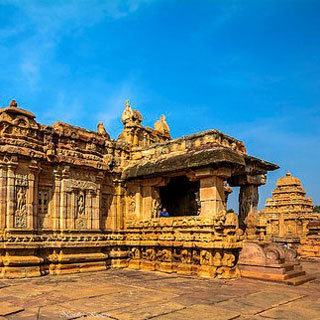 Somnathpur, the place where the Hoysala Kings left their footprints which is treasured as an eternal beauty and an architectural marvel. Isolated from the hustle bustle of the cities Mysuru and Bangaluru, Somnathpur is a tranquil town beholding the beauty of the ancient culture heritage in the form of temples and monuments.

Out of all the locations, the Chennakesava temple in Somanthpur holds your breath at the very first sight with its grandeur and ethnicity. The entire region is shaded with lot of Banyan trees which may be hundreds of years old with a cool climate prevailing around. The lush green gardens on your way to the main facade of the temple from the front entrance is a very well maintained area despite the hundreds of tourists thronging the temple.

The grand architecture of the Chennakesava temple at Somnathpur can be synonymous to a poem written on stone. The pictures of the temples from the internet clipped on your vision board will be standing in front of you with all its grandeur and beauty. There are three temples housed inside the premise and the outer periphery of each of these temples is a star shaped one. The protruding platform of every face of the star shaped design has an elephant carved on it and it is an awesome fact to notice that all these elephants are identical to each other. The inner walls of the temple are filled with sculptures depicting the ancient epics of Hinduism, lifestyle of the Hoysala regal families, army, Kings Queens and Laymen which looks as if the time has recreated itself which had slipped out from the pages of History.

The presiding deity of the temple is called as Chennakesava owing to His immortal beauty. There is a central hall acting as a vestibule connecting the three temples. The other two presiding deities are Lord Venugopala , God with a flute in his hand and Lord Janardhana, liberator of mankind from evils. Around the three temples, the outer wall houses lot of small cubicles with two pillars on either side. The geometrically designed corridor amazes you with its view that, when you stand at one corner of the corridor, the cubicles are not visible and there is a long row of identical pillars from one end to the other. Thus, Somnathpur makes you travel in a time machine for quite some time.

Somnathpur, a must see destination, which will drench you with happiness, surprise and cherished memories.

How To Reach Somnathpur :

Air : Bangalore located at a distance of 174kms is the airport nearest to Somnathpur. From the airport, you can choose between road or rail to reach the destination.

Train : Mysore junction situated at a distance of 35 kms is the railhead nearest to Somnathpur. From there you have easy access by road to reach the destination.

Road : Somnathpur is well connected by road to other cities around giving you variety of travel options to reach the destinations.