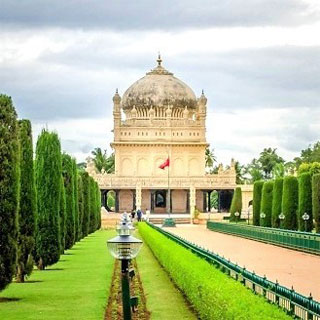 A small island near Mysore with the Cauvery River on all the sides is the popular tourist destination Srirangapatna, in the South Indian state Karnataka. Srirangapatna is renowned for the Renganathaswamy temple and the monuments in connection with Tippu Sultan, the ruler of the Kingdom of Mysore.

The Renganthaswamy temple is one among the six temples situated on the banks of the River Cauvery where the presiding deity Lord Renganatha blesses his devotees in a reclining posture. The temple was first consecrated in 984AD and the temple has seen several renovations and expansions over the centuries. The temple’s popularity reached its epitome during the period of the Hoysala Kings. Though the temple is not so big, it has its own antiquity and possesses a significant position in the Sri Vaishnavism tradition. The façade with intricate carvings, two long corridors surrounding the sanctum for circumambulation and the pillars and other halls are with an elegant beauty though not fully filled with sculptures and figurines.

The obelisk in memory of the Tipu Sultan is another location, the tourists tend to visit. The obelisk is comparatively smaller unlike those in Egypt, but still beholds your eyes reminding you the history lessons on Tipu Sultan we went through during our school days. The River Cauvery flowing around and the railway track in the vicinity gives a beautiful touch to the obelisk and its surroundings. The whole area where the obelisk is present is enclosed within a fort and the view of Cauvery from the fort is quite amazing.

The summer palace of Tipu Sultan can be visited after seeing the Death place of Tipu where he laid unattended to for two days during his valiant battle with the British. The summer palace was occupied by the British people after Tipu’s demise and now the entire premise is maintained as a Museum. The various artefacts in connection with the Tipu’s period and the weapons used during the battles are exhibited here. The palace is called as “Dariya Daulat” meaning “Wealth of the Sea”.

The mosque, mausoleum where Tipu Sultan and his father Hyder Ali are laid to rest, Sangam, the point where the River Cauvery from north and south join together, Balmuri Falls and Ranganathitu Bird Sanctuary are the other interesting locations where the tourists can experience and enjoy the nature’s beauty.

How To Reach Srirangapatna ?

Air : Mysore is the airport nearest to Srirangapatna. From Mysore airport, the destination can be reached traveling a distance of 38kms.

Train : The railway station at Srirangapatna is very near to all the tourist locations across the town. Most of the trains on the Bangalore-Mysore rail lines halt at Srirangapatna.

Road : Srirangapatna is well connected with all other parts of the state with the network of roads ensuring you a comfortable travel to your destination.