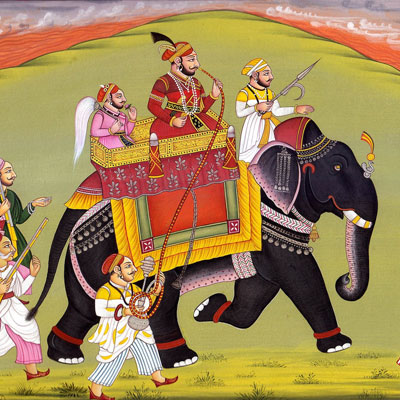 Rajasthani Paintings have a strong reference in the history since pre-historic ages. The paintings found by the archaeological departments and historians have found so many interesting works of Rajasthani artistes still possessing the grace and charm. Gadra Cave Paintings is one such classic example of 10,000 years old rock paintings.

The formative period of Rajasthani paintings got infused with the skills and styles of artistes who got migrated from Gujarat to Rajasthan to avoid the ravages from the invasions of various Arab rulers spread over different centuries.

The evolution of Rajasthani paintings have been through Jain traditions or Jain styles till 12th century, and in 13th century, Thirthankaras and Kalpasutras were the main themes of majority of the paintings. From 15th century onwards, the style took a turn into a unique one, called as Aphransh style. Many of the paintings are still preserved with its original grace in the libraries and museums across Rajasthan.

The major styles of Rajasthani paintings are popularly known by the names,

The common themes of most of the Rajasthani paintings mainly focus on the great Hindu epics like Ramayana and Mahabharatha, events from Lord Krishna’s life, different kinds of landscapes in Rajasthan and the varied lifestyles. The paintings over different periods exhibit the influence of Mughal invasions impacting cultural and traditional values.

Across Rajasthan, several schools have been imparting knowledge and practice on Rajasthani traditional paintings since 16th century and many of them are still functioning like Mewar School, Marwar School, Dhundar School and Pahari School. Every school focuses on unique style of painting like the backdrops, styles, materials used for painting and many other factors

The popular touristic locations of Rajasthan deserve a special mention for these Rajasthani paintings well preserved and maintained exhibiting the centuries’ old history, heritage, traditions and culture in the form of intricately created paintings.