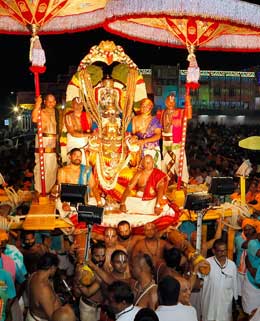 Brahmotsavam is a grand nine-day festival celebrated with great zeal at the world famous Tirumala Tirupati Sri Venkateshwara Temple every year. Since it was Lord Brahma who first conducted this festival at Tirupati temple, it came to be known as Brahmotsavam or Brahma's Utsavam. Hence it is considered as the most auspicious festival among all other festivals in Tirumala.

It is also believed that Lord Brahma worshipped Sri Balaji of Tirumala Thirupathi Temple on the banks of the holy Pushkarini River in order to thank the Lord for protecting mankind.The Brahmotsavam Festival is observed with great traditional fervor and glory. There will be religious processions on all the nine days of the festival during which the idol of the presiding deity of Tirupati Temple, Balaji or Sri Venkateshwara are taken out through the streets in different chariots. Hundreds and thousands of devotees participate in this grand festival to receive the blessings of Sri Balaji.

And they even remarked that they experience a feeling of complete bliss and heavenly connect while visiting the Tirupati Temple during Brahmotsavam which is termed as “ Vaikunth Anubhav”. A lot of rituals are carried out on all the nine days of the festival. The process of sowing of the navadhanyas known as "Ankurarpana" is an important ritual done on the evening before the first day of the Brahmotsavam Festival.

During "Ankurarpana", nine different kinds of seeds are planted in nine mud pots over nine days and they are dedicated as offerings to the Navagrahas (celestial bodies in Hindu astrology). And this ritual indicates prosperity, fertility and abundance. "Dwajarohanam" marks the beginning of the Brahmotsavam Festival. Here, a flag containing the picture of Garuda is hoisted at the Dhvajastambham in order to invite the Gods to attend the Brahmotsavam Festival. It is believed that 30 million deities accept the invitation and take part in this festival.

The month of Celebration:

The Brahmotsavam Festival in Andhra Pradesh is mainly celebrated between the months of September and October.