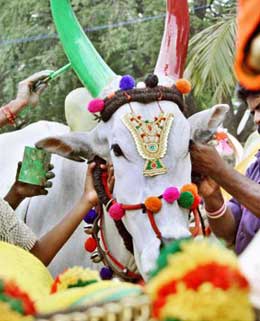 Kanuma Festival is an important festival of Andhra Pradesh which is mostly dedicated to worship cattle. It is celebrated on the third day of the harvest festival of Andhra Pradesh, Makar Sankranti. Kanuma Festival is regarded as a special occasion by the farmers and they observe this day with great momentousness and enthusiasm. According to Hindu mythology, this day has special significance as it is believed that Lord Krishna saved the people of Gokulam from the huge flood in the village on this day. As per the myth, the lofty Govardhan Hills at the Gokulam village blocked the clouds and because of this, the villagers received no rainfall which made them very disappointed.

Seeing this, Lord Krishna asked the villagers to pray to the Govardhan Hill for rain and hence they received. This aroused the anger of Lord Indra who is regarded as the God of Rain. To take vengeance for this insult, Lord Indra created drastic rain and thunderstorm and flooded the village to destroy the people as well as their cattle. But Lord Krishna came for their rescue and lifted the Govardhan Hills with his little finger to provide shelter to all the villagers in danger. On realizing his mistake, Lord Indra withdrew the heavy rain from Gokulam village.

And to calm Indra's anger, Lord Krishna offered a Govardhan Puja to him. Since then the Kanuma festival is celebrated to commemorate this incident. As this day is meant to worship the cattle, the farmers wake up very early in the morning to bathe the cattle and decorate them with ornaments as well as paint their horns with bright colours. Then they are taken to the nearby temples where some rituals are performed to worship them. Another highlight of Kanuma Festival is the bullfight and betting done on the cattle.

The month of Celebration:

The Kanuma Festival in Andhra Pradesh usually falls in the month of January.