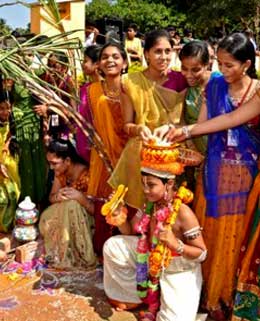 Makara Sankaranthi is a four days festival grandly celebrated in the South Indian State of Andhra Pradesh. Celebrating Makara Sankaranthi and following the rituals and ceremonies is considered to be very auspicious by the people of Andhra Pradesh. There will be festive mood everywhere well before the actual dates. Scientifically, Makars Sankaranthi represents the end of winter and the beginning of the summer seasons. Religiously, Sun starts travelling towards the Equinox and it is referred to as Utharayanam.

Makara Sankaranthi is celebrated for four days with different varieties of rituals. The day before the Makara Sankaranthi is called as Boghi. The significance of this festival is to throw out the old and welcome the new. People lit a bonfire and throw all the unwanted things from their houses into the fire. The religious aspect of this ritual is that mankind has to surrender all his ego, anger , jealous and all unwanted qualities to the fire and rejuvenate as a perfect human being. You can very commonly see the children and women are showered with the jujube fruit to get protected from the evil spirits in life.

The second day is the actual celebration called the Makara Sankaranthi.People enjoy putting Rangoli in front of their houses and decorate them with different flowers. Despite of the age group, people wear new dresses and share the delicious items with their families and friends. Chakinalu, Ariselu, Appalu and Dappalam are some of the famous food items prepared during Makara Sankarathi.

Kanuma is the third day of the festivals. This day is meant for the farmers who show their gratitude to their cattle which is very essential for their lives. The farmers decorate their cattle which symbolizes prosperity.The cows which have the religious importance are also given due respect and weightage during this function and farmers celebrate this day as a thanks giving function.

The last day of the celebrations is called Mukkannumma , when farmers offer prayers to all the five cosmic elements of Earth. it is a tradition that people abstain from consuming non-vegetarian during the first three days. The fourth day is meant for non-vegetarians along with celebrations like cock fighting, ox race bullock race and kite flying. Yet another feature of Mukkannumma is that a person called Haridasu, servant of Lord Vishnu, roams around the streets along with colorfully dressed cow. He keeps on singing the glory of Lord Vishnu. People greet him and donate him cloths, money and food.

Thus, Makara Sankaranthi is a very colorful festival celebrated in a very grand manner in every nook and corner of Andhra Pradesh!. this is actually the rejuvenation of friends and families who have lost their precious time due to their busy lives.