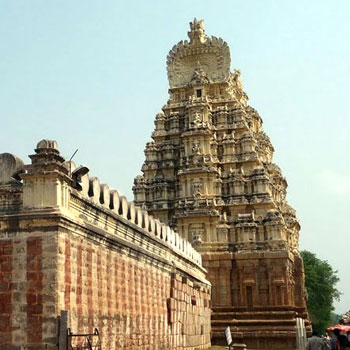 The administrative headquarters of the Potti Sriramalu District, flanked by Prakasam on the North, Chittoor in the South, Kadapa in the West and Bay of Bengal in the East is Nellore in the South Indian state of Andhra Pradesh. The city situated on the banks of the river Pennar is located at just 25kms from South Asia's one of the biggest ports Krishna Patnam.

Nellore has a long history dating back to the 3rd century under the rule of various dynasties like Maurya, Kharavela, Satavahanas, Pallavas, Cholas, Eastern Gangas, Kakatiyas, Telugu Cholas and Pandyas. By the end of 18th century, the city was brought under the control of British Rulers and attached with the Madras Presidency. From 1956 onwards, it was annexed with the South Indian State Andhra Pradesh. The economy of Nellore depends on the mica factories and productions of lemon and rice.

Places of interest in and around Nellore:

Udhayagiri Fort : A 14th century fort situated at a height of 3000ft above the sea level is the Udhayagiri Fort. As the place was under the different rulers like Pallavas, cholas, Viayanagars and Mughal Kings, the fort has seen a gradual expansion during all the reigns. There are 13 buildings inside this fort with a blend of different architectural styles . This fort is at a distance of 100 kms from Nellore.

Venkatagiri Fort : Famous for the cotton sarees weaved in the Jamadri style, Venkatagiri is a famous town housing a fort called Venkatagiri Fort. The fort is situated inside a dense forest in an extremely calm and serene atmosphere. The fort was constructed in 1775 by the then Rucherla Rulers as a symbol of their power.

Sri Renganathaswamy Temple : A 1300 years old temple for Lord Vishnu constructed by the Pallavas on the banks of the Pennar river is the Lord Rengananthaswamy Temple. It is a very sacred place for the Vaishnavites across the country.

Other than the above, the Narasimhar temple at Panchalakona, Jannawada Kamakshi temple, the spectacular Mypad Beach and the famous pulicat lake are the to be never missed tourist spots in Nellore.

How To Reach Nellore?

By Air : The nearest airport to Nellore is the Tirupati airport. But due to the limitations in the frequency of the flights operated, it is highly recommended to reach Chennai by air from anywhere in the world and from there Nellore can be reached easily.

By Train : One of the cleanest railway stations in the country, Nellore , is crossed by around 140 trains daily servicing to thousands of passengers. It is situated on the Howrah-Chennai main line and Delhi Chennai main line.

By Road : Nellore is well connected to all the major cities in Andhra Pradesh and also to Chennai.