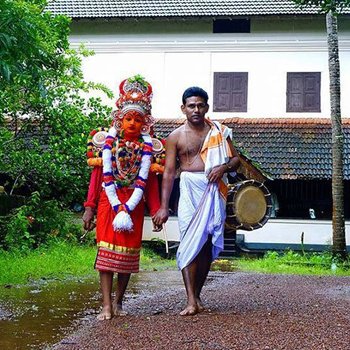 Kasargod is the northern most district of Kerala state in India. It was declared a separate district on May 24, 1984. Before it was a part of Kannur district. It is famous for its multi linguistic culture, as there are 7 languages spoken by the people residing at Kasargod. It was regularly visited by the Arabs and the Portuguese centuries before. It was a major trade centre back then.

The history of Kasargod says it was ruled by famous Kolathiri king. When Vijayanagiri kingdom attacked them and when his empire declined, Ikkeri naikas came to power and ruled till the end of 16th century. Then Hyder ali of Mysore conquered Kasargod during his try to conquer whole Kerala, but he failed in doing the same in case of Thalassery fort. He went back, and then his son Tipu sultan set eyes on Kerala, and captured Malabar later surrendering it to the British. Kasargod in 1956 became a part of Kerala state when the neighbouring states Kerala and Karnataka were reorganized.

To the east side of Kasargod, it is walled by the mighty Western Ghats, and is blessed with beautiful hills, lakes, rivers, beaches, and even backwaters. The coastline of Kasargod to the west is around 30 km's long and is a must visit seaside for those fond of sunbathing.

Kasargod is a jackpot for art enthusiasts as it is rich in culture and heritage. The various art forms like Yakshagana, Bombeiyatta [puppet dance], bull fight, and most importantly Theyyam attracts a lot of winged visitors from all over the planet.

Kasargod is a mixture of lakes, rivers, backwaters, beaches, hillstations, monuments, ancient forts and list goes on. Let us introduce some of the must see spots-

Summer - March to May marks the summer season in Kasargod. The temperature ranges from 25°c to 31°c. It is a fair time to visit Kasargod.

Monsoon - Kasargod receives the highest amount of rainfall in Kerala. By June Kasargod gets wet by South West Monsoon and lasts till September, and October, November months Kasargod is hit by North East Monsoon.

Winter - The best time to make a visit to Kasargod is during Winter Season. It starts by December and lasts till the month of February. The pleasant and cool climate of Kasargod during winter attracts a lot of tourists.

By Road - Kasargod can be accessed by NH 17 which passes through nearby cities like Calicut [210], Kannur [97] and Mangalore [60]. There are frequent bus services available from all these cities to Kasargod.

By Air - The Nearest International Airport is Mangalore which is 60 kms from Kasargod town. There are regular flights available from all the major cities India, as well as cities abroad. From the airport grab a taxi and it will take less than 2 hours to reach Kasargod.

By Rail - Kasargod is connected to all major cities by rail. There are regular trains from many parts of India passing through Kasargod. You can get down at any of these stations namely Kanhangad, Kasargod, Kumbla, Uppla, Manjeshwar, Nileshwar and grab a taxi or board a government bus to visit any of the sightseeing places in Kasargod.

Kasargod has everything starting from the unique backwater chains, misty hills, rivers, lakes and lagoons to serene beaches, and historical monuments. The famous mystical Theyyam Performance is a must see ritualistic art form, which will surely energize and at the same time enlighten your mind. Hire a houseboat and cruise along the still waters of Valiyamparamba, admiring the beauty of the lovely lush countryside while tasting some fresh hot Kerala Fish Fry. So planning a vacation? Do consider Kasargod on your list and you will not be disappointed.