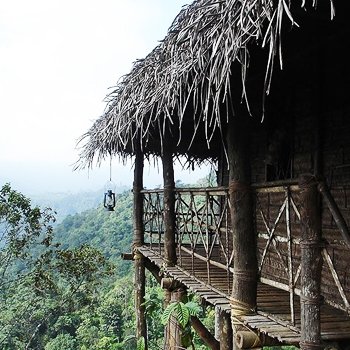 Wayanad, the 12th district in Kerala, offer an exquisite style of nature, combining hills, wildlife, rice paddies and extremely elegant waterfalls. Until 1980 it was a part of Kannur and Kozhikode after which it was declared as an independent district. The name Wayanad signifies "Vayal Nadu", the land of paddies. It was not a tourist destination some years before, likely because people were not aware of its natural beauty. The district is the least populated in the state, majority of being tribals, and the 3rd largest in area among the 14 other districts in Kerala. Almost half of the area is uninhabited and unexplored which makes Wayanad for some, a silent escape to the nature from the noisy and polluted cities. It is a feast for wildlife enthusiasts and nature lovers. Wayanad is a major source of revenue for the state coming from cultivation of cash crops such as tea, coffee, cardamom, pepper and so on which are exported to various countries.

Summer [March - May] Summer at Wayanad starts by March of the year, ending by May. During summer Wayanad is considerably warmer but accompanied by cool breeze which makes it comfortable and pleasant for the visitors.

Monsoon [June - November] From June to September, the South West Monsoon reaches Wayanad, and from October to November, the North West monsoon. Strong rainfalls and drizzles make it hard to travel around, nevertheless Wayanad looks at her best when it rains as if she has worn her best outfit.

Winter [December - February] winter is cooler and the temperature may get down to 10?c. For the same reason tourists choose this time of the year to visit Wayanad as it is cool, calm and literally speaking, "breathtakingly beautiful". As a reminder, do not forget to take your sweaters, because nights are sometimes bone chilling.

How to reach Wayanad

By Air - Kozhikode [Calicut] International Airport is the nearest airport from Wayanad, likely 94 kms away. Get down at the airport and grab a taxi. It will take about 2h 30m to reach Wayanad.

By Rail - There are no rail routes to Wayanad. The nearest railway stations are Kozhikode, Kannur, and Mysore. From there grab a taxi, or hop on a Government bus to Wayanad from any of these cities available 24/7.

Looking for a less crowded and naturistic place to plan your vacation? There comes Wayanad which will definitely suit the plan. Considering the whole area, it is so sparsely populated and therefore there are a whole lot of places which is far away from any kind of disturbances or pollution, providing its visitors a serene and calm ambience to experience the tranquility of Mother Nature in the woods of Wayanad. Take your camera when you make your way to Wayanad, because you are going to need it the whole time you spend at this majestic piece of land, to capture the moments that you will never risk to miss. Hill stations, Wildlife Sanctuaries, Deep forest treks, cycling along the mountains, Bamboo rafting, tea plantations, and so on, Wayanad will captivate you by its enchanting beauty.