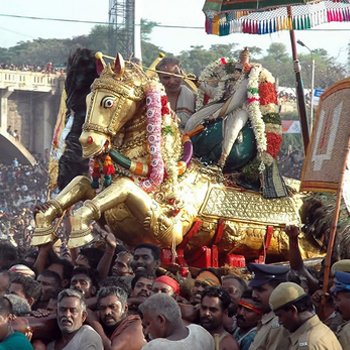 World’s one of the longest festivals celebrated for almost a month in summer is the Chithirai Tiruvizha, with its epicentre at Madurai. Acclaimed as the Athens of the East, Madurai is the architectural predecessor for the Athens in Greece and is the oldest cities of the world with a longest surviving civilization.

Goddess Meenakshi is believed to be the driving force behind this city and the entire Madurai is built around the temple in perfect squares. The temple is renowned for its grandest architecture loaded with more than 33,000 sculptures.

The annual festival Chithirai Tiruvizha commences in the first week of April and lasts for almost a month. This is even compared to the Kumbhmela in North India, as lakhs of people assemble in this city to be a part of this legendary festival.

It is estimated that at least a million people arrive here and the number is always in the increasing trend. Chithirai Tiruvizha aims to break the barriers between Saivism and Vaishnavism as Goddess Meenakshi, sister of Azhagar who is an incarnation of Lord Visihnu, marries Lord Sundareswawrar, an incarnation of Lord Shiva

The one line story of Chithirai Tiruvizha is “Meenakshi weds Sundareswarar”’. As she is considered to be a family deity for most of the families in erstwhile Pandya Kingdom, the present region in and around Madurai, the entire region wears a festive look days ahead.

Series of religious rituals and poojas take place in a well-organized manner. On the day of the celestial wedding, thousands of women volunteer to assist in cooking as the massive cooking is to feed lakhs of people attending the wedding. It is also a customary ritual that all the women change a new mangalsutra by replacing the old one, as soon as the celestial wedding gets over.

One of the highlights of this festival is the Ethir Sevai, where Lord Azhagar riding on a golden horse, brings lot of gifts to his sister for her marriage and the entire city assembles at the outskirts to welcome him.

There are other social events hosted throughout the month. Exhibitions, entertainment centres, restaurants, play areas, religious concerts and spiritual discourses are arranged across the city.

It is clear from the rich history and tradition of India that such festivals are organized to boost the local economy of the people. Festivals indeed inculcate cultural harmony and rejuvenate the spirit of social living which is in demand for ever. Chithirai Tiruvizha is one such festival that is celebrated pompously since centuries.