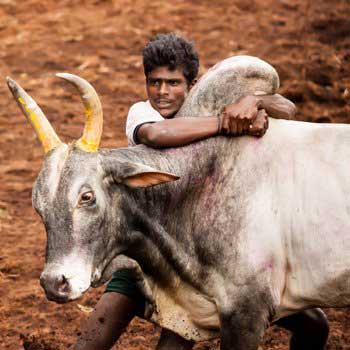 Jallikattu is the typical Tamilians festival, this fete falls on the second day of Pongal (January). During this day the cows, bulls and buffalos are given a complete wash, beautified with garlands, and are worshipped in the morning, the most welcoming event of this day is bull race in the late afternoons don't ever miss a chance to enjoy this nail biting race.

What's so special? Fear is an obscure word in the dictionary of Tamil people. Courage and bravery are infused in their blood. Ordinary things never interest Tamilians, all they need is adventure, thrill and spirit. To show their bravery to the world, even from the alpha of the clan lots of gallantry sports had been practiced. One such ancient valor sport is Jallikattu, which is known by many names such as Erthaluval, Erukol, Manjuviratu, and Madu Pidithal. Eru, Manju, Madu all these three words refer to Ox. This game is exclusively designed to exhibit the pugnacious nature of Tamil oxen and the peerless valor of Tamil men who tame it.

Agriculture is the backbone of any country, everyone toil day and night predominantly for food, and other things comes next. If a nation has enough food to feed its people, then it is one of the safest place to reside in the world. Once such safe haven is Tamilnadu. Agriculture is the culture of Tamilnadu. When we talk about agriculture, it's not a one man army, it's a crew where both animals and human work together sharing a brotherhood. One of the inseparable partners in agriculture is cattle, to be particular “the Oxen”. Cattle is the pride of a farmer, and he considers every animal in his farm as his own blood. The rich Tamil culture, says to revere the cattle as God. This is why every cow is worshipped as Goddess Lakshmi and every oxen is revered as God Nandhi. Every Ox, every cock, and every goat is the honor of farmers. How strong and pugnacious these animals are, shows the wealth of a farmer and how well he had feed his animals.

Significance : Jallikattu is an adventurous sport of Tamilnadu, and is a part of Pongal celebration. This sport takes place on the eve of MattuPongal (Cow Pongal), in the month of January. This is one of the living ancient sport of Tamilnadu, and which is celebrated with great fervor in the village sides and in Madurai. The ultimate motto of this game is “Fight or Flight”. The native breed of Tamilnadu Kangeyam Ox are bred only for this sport. These oxen are very pugnacious and ferocious by nature. Taming these bulls is not an easy task, it needs skill, power and strength, and so the one who tames these bulls is considered to be the strongest person and is honored with titles.