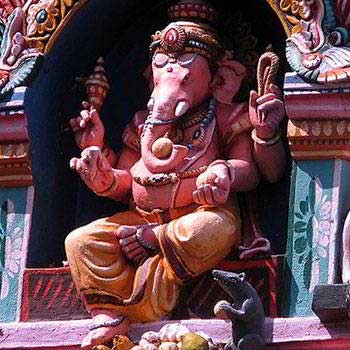 The elephant headed deity, Lord Ganesha is the focal centre of celebrations on the day of Vinayaga Chathurthi. This festival falls generally in the month of August or September in the Gregorian calendar. This is considered to be a very auspicious festival across the country.

The statue of Lord Ganesha is installed in houses and at points of junctions in the city in varied sizes the previous night before the celebrations. Right from the early morning on the day of the festival, special poojas and rituals are conducted in temples, houses and even in street junctions.

It is quite usual to see the small temples of Lord Ganesha on almost all the streets of India. So wherever you go, you can see a small crowd performing poojas to the most beloved deity of Hinduism. Lord Ganesha. He is believed to make all our endeavours successful if we submit our prayers before the start of the task.

And he is a friendly form of god especially to kids because out of all gods, he appears in a very different form with elephant heads, big belly and in contradiction to his body size and shape, he has a small rat in front of him as his vehicle.

The rice balls called Modaka are his favorite food items and on this Ganesh Chathurthi day, the dishes are offered in plenty to him and after the rituals are over, they are distributed as Prasadh. The Ganesha, sitting atop the Rock fort hillock in the Trichirapalli city is worshipped by thousands of devotees on this day. Especially, two huge rice balls weighing 75kg each are offered to him on this auspicious day and it will be a real feast for the eyes.

Pray to Lord Ganesha, and get His blessings for all your future endeavours!